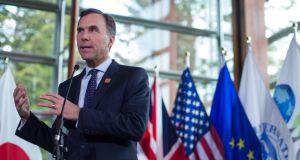 The San Francisco-based lender raised C$1 billion of seven-year bonds, according to people familiar with the matter. Metro issued C$400 million of 30-year debt in its first issue since 2017 while Bell Canada priced C$750 million of bonds of a similar maturity.

It’s the first time this year that three corporate bonds are being priced on the same day, according to Bloomberg data. Royal Bank of Canada priced the largest transaction so far this year on January 24th when it raised C$2.25 billion by selling senior bail-in bonds due in seven years.

Risk spreads in the Canadian corporate bond market are at 103.5 basis points, similar to the levels seen at the end of last year, according Bloomberg Barclays indexes. Spreads remain resilient even as the virus outbreak is raising concerns of a global slowdown due to the break-up of supply chains as well as contraction of demand for commodities such as oil, a key Canadian export.

On Monday, Morneau warned the spread of the virus from China is expected to have a “significant” impact on global growth that will spillover into Canada as it disrupts tourism and supply chains. – Bloomberg

1 Bank leaked my loan request to family who tried to rip me off
2 When the Chemistry no longer works – the closing of a leading Irish ad agency
3 Coronavirus: Irish holding back on holiday plans
4 Solar panels: Are they worth the investment?
5 Eason acquires rival Dubray Books for undisclosed sum
6 Can I see my father’s previous wills?
7 Ryanair and Aer Lingus monitor impact of coronavirus on travel to Italy
8 Fuel company loses €1.35m challenge over tax bill in ‘green diesel’ case
9 Accumulated profits at David McWilliams’ media company hits €675,000
10 New Irish commercial property website goes live
Real news has value SUBSCRIBE