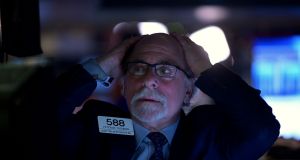 A traders working at the New York Stock Exchange on February 24th. World stock markets and oil prices were hammered by fears of a coronavirus pandemic, while gold hit a seven-year peak on safe-haven buying. Photograph: JOHANNES EISELE/AFP via Getty Images

US stocks suffered their worst day in two years after a wave of volatility swept global markets as new coronavirus cases outside China rattled investors and dashed hopes that the outbreak had been contained.

The S&P 500 fell 3.4 per cent, its worst one-day decline since February 2018, dragged down by energy and technology stocks. The Nasdaq Composite lost 3.7 per cent and the Dow Jones Industrial Average shed more than 1,000 points to close the day 3.6 per cent lower.

Energy stocks led the decline, driven by the weakening oil price, followed by technology shares. Investors flocked to the safety of government debt, pushing the yield on the US 10-year Treasury bond down 10.2 basis points to 1.369 per cent, a touch above its record low.

European bourses bore the brunt of the sell-off on fears over the impact of the virus on the global economy, with UK stocks having their worst day for five years and Italy’s MIB index dropping 5.4 per cent, its largest fall since 2016.

“This is no longer solely an Asia issue,” said Robert Carnell, chief Asia-Pacific economist at ING.

In Europe, the continent-wide Stoxx 600 fell 3.8 per cent, while the UK’s FTSE 100 ended the day 3.3 per cent lower. Airlines and tour operators were hit hard, with shares in easyJet falling 17 per cent and Ryanair sliding 13 per cent.

This followed heavy falls in Asia where Seoul’s Kospi index fell 3.9 per cent, its worst day since late 2018.

In US equities, the sell-off was led by travel companies including American Airlines and Norwegian Cruise Line. Microprocessor groups such as Advanced Micro Devices, which face supply chain disruption because of the outbreak, also fell.

The market turmoil came after new evidence that the virus was spreading globally. Italy imposed a quarantine across at least 10 towns over the weekend in an effort to contain the biggest outbreak of the virus outside Asia, with 229 confirmed infections and six deaths.

South Korean authorities reported 231 new cases of the virus, bringing the total number of infections to 833. The government added it had put 7,000 troops under quarantine after 11 had tested positive for the virus.

Iran said there had been 12 deaths and 61 confirmed coronavirus cases in the country, a sharp rise from the eight fatalities and 43 infected patients it reported a day earlier. Turkey closed its borders with Iran, while Iraq, Afghanistan, Armenia and Pakistan have imposed restrictions on border crossings and trade.

Despite the outbreak in Italy, EU authorities said there were no plans to suspend travel across the 26-country Schengen area of visa-free travel.

“We need to take this situation extremely seriously - but we must not give in to panic and of course to disinformation,” said Stella Kyriakides, the EU’s health commissioner.

Bruce Aylward, head of the World Health Organization team of foreign experts in China, praised the country’s response to the crisis, telling a press briefing in Beijing that authorities had implemented “the only successful measures we have seen”. He said the turning point in Wuhan, the centre of the outbreak, had been reached, with more people leaving hospital than going in.

However, concerns about the outbreak have continued to weigh on commodities. The price of Brent crude, the global oil marker, fell 4 per cent to $56.19 a barrel. Gold rallied 1 per cent to $1659.57 per troy ounce. - Copyright The Financial Times Limited 2020