Extreme fluctuations in US trading blight markets in Europe, though panic recedes 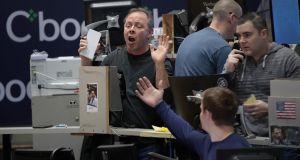 European shares closed down more than 2 per cent on Tuesday on the back of continued market volatility in the US.

Britain’s major share index, the FTSE 100, had its worst day since the Brexit vote as a violent global sell-off in stock markets shook investors.

US equity indexes fluctuated after a tumultuous morning that saw the Dow swing more than 900 points in 25 minutes.

The benchmark for US share volatility went through wild gyrations after hitting a two-year high.

The Iseq closed the session down 1.4 per cent, with all of its heaviest hitters in negative territory with the exception of Ryanair, up 2.3 per cent to €16.20 after appointing brokers for a share buyback, and AIB, up 3.6 per cent to €5.29.

Independent News & Media closed down almost 0.5 per cent at 10.8 cents per share. It bobbed up and down throughout the session, however, after issuing a circular to shareholders in relation to an upcoming board overhaul and egm. It veered between being down more than 4 per cent in mid-morning, to being briefly in positive territory in mid afternoon.

Resources explorer Aminex was down more than 12 per cent, a day after providing investors with an update of its Tanzanian operations.

The stars of the past months’ rally were the worst fallers on Tuesday. Financials led the slide. HSBC, Prudential, Lloyds and Barclays tumbled 2.5 to 4 per cent.

Asset managers also featured prominently among the worst-performing stocks as the global markets “melt-up” reversed, pummelling investors’ portfolios. Investment trust Scottish Mortgage tumbled 5 per cent as the sell-off in US tech stocks took its toll on the fund, whose holdings include Amazon and Tesla.

Oil majors BP and Royal Dutch Shell also took a sizeable chunk out of the blue-chip index as the rout in equities sent crude prices tumbling.

Mid- and small-caps were not spared from the sell-off. The FTSE 250 slid 2.2 per cent. Ocado shares fell 3.2 per cent after the online supermarket said investment would hold back 2017-18 earnings.

The biggest exchanges – the German Dax and French Cac 40 – were each down 2.3 per cent.

Munich Re insurance group was the significant faller on the German Dax, down more than 5 per cent on the day. It was closely followed by German banking behemoth, Commerzbank, which fell 4.5 per cent. Insurance group Allianz also fell by close to 4 per cent.

Automotive giant Renault fell close to 3.5 per cent in Paris, while Kering, the owner of luxury goods brand Gucci, dropped by almost 4 per cent.

The S&P 500 Index plunged as much as 2.1 per cent at the open of trading Tuesday before regaining ground. The Dow declined more than 500 points before it, too, bounced back. Trading volume in both benchmarks was more than double the usual pace.

Defensive sectors utilities and real estate lagged, while technology and consumer discretionary were among the top-performing sectors.

General Motors shares rose 4 per cent after the automaker reported strong demand for its pickup trucks and SUVs. And chipmaker Micron Technology rose roughly 8 per cent on favourable earnings news and upgrades from Wall Street analysts.