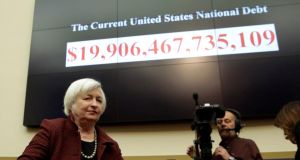 US Federal Reserve chairwoman Janet Yellen: Bank of Ireland and Permanent TSB both performed well on news that she intended to stick with her plan to increase interest rates. Photograph: Yuri Gripas/Reuters

Good earnings reports and the prospect of a US interest rate rise boosted bank shares in Europe and aided markets generally.

Bank of Ireland and Permanent TSB both performed well as the sector rose across Europe on news that Janet Yellen, chairwoman of the US Federal Reserve, intended sticking with her plan to increase interest rates.

Higher interest rates translate into bigger profits for banks, which have been lending money at low charges for a long period. Bank of Ireland rose 2.04 per cent to 25 cent while Permanent TSB closed 0.74 cent up at €2.72, having broken the €2.75-mark during the day. Both traded strongly, dealers said.

International packaging group Smurfit Kappa climbed 1.15 per cent to €25.545 on signs that its industry is increasing prices.

Ryanair was up 0.8 per cent at €14.475 as the carrier benefitted from positive sentiment towards the sector on Wednesday.

Betting giant Paddy Power Betfair tumbled 2.3 per cent to €98.30 after a note on the sector from HSBC downgraded the stock to “hold” from “buy”.

The UK banking index rose 1.5 per cent to an 18-month high, helped by a 1.2 to 2.1 per cent rise in RBS, Standard Chartered, HSBC and Lloyds on news of Ms Yellen’s interest rate stance.

The mining index, up 0.5 per cent, was also among the top gainers. Shares in BHP Billiton, Rio Tinto and Anglo American advanced 0.3 to 2 per cent. Elsewhere, construction company Ashtead was up 2.5 per cent, while insurers Prudential and Legal & General increased more than 1 per cent.

Tour operator TUI was the biggest loser on the index, down 7.2 per cent on profit taking after its results led to a jump on Tuesday. The stock erased its gains made in the previous session.

Gambling firms Ladbrokes and William Hill were under pressure, however, down 3.2 and 2.8 per cent, after HSBC cut its ratings on both stocks to “reduce” from “hold”.

Shares in Credit Agricole jumped 4.7 per cent after France’s biggest retail bank beat forecasts with a smaller than expected earnings drop in the fourth quarter. The reaction was particularly positive to results from Credit Agricole’s French retail bank unit LCL, which analysts at Jefferies said had been an ongoing concern for some investors.

Wall Street rose on Wednesday, with the S&P on course for a streak-day winning streak for the first time since September 2013.

Procter & Gamble jumped 3.7 per cent to a two-year high of $91.10, giving the biggest boost to the Dow and the S&P, after Trian Fund disclosed a stake, which could pressure the company to cut costs and under-performing divisions.

Shares of Southwest, United Continental, American Airlines and Delta rose between 2 per cent and 3.7 per cent after Warren Buffett’s Berkshire Hathaway reported investments topping $2.1 billion in each of the carriers.

AIG weighed the most on the S&P, dropping 8.6 per cent after the commercial insurer reported a larger than expected quarterly loss.