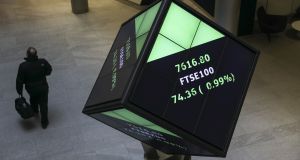 European markets slid on Friday after a US air strike in Iraq stoked geopolitical tensions and pushed investors away from risky assets, though energy stocks gained from a surge in crude oil prices.

The Iseq fell 1 per cent as markets across Europe were subdued as a result of investors’ jitters about the geopolitical climate. Airline stocks were among those to lose ground as a result of higher oil prices, with Ryanair dropping 1.1 per cent to €14.74, while building materials group CRH declined 2 per cent to €35.74.

Food group Glanbia was among the fallers, declining 1.6 per cent to €10.16, while packaging company Smurfit Kappa fell back 1.7 per cent to €34.10. Irish Residential Properties Reit fared better, adding 0.6 per cent to €1.58.

Cairn Homes finished up 0.2 per cent at €1.28. The housebuilder has secured planning permission for 400 new housing units in south Dublin.

The FTSE 100 added 0.25 per cent, outperforming other European markets thanks to its exposure to rising oil stocks as well as gains for tobacco companies.

The blue-chip index had been under pressure earlier in the session, but Shell and BP jumped more than 2 per cent each. However, prospects of higher fuel costs dragged shares of airline companies lower, with EasyJet and British Airways and Aer Lingus-owner IAG giving up 1.7 per cent and 3.4 per cent respectively.

Shares in British American Tobacco (BAT) and Imperial Brands also rose after the US Food and Drug Administration exempted menthol and tobacco from a list of popular e-cigarette flavours that it has banned under new guidelines. The ban is less stringent than the one originally proposed, sending BAT shares up almost 2.7 per cent and Imperial Brands up 2.5 per cent.

Next predicted a higher annual profit due to better-than-expected sales through the Christmas period, but it gave up early gains to close down 0.2 per cent.

Payment solutions firm Finablr slipped 4 per cent after its Travelex unit said on Thursday it had taken its systems offline after being hit by a software virus.

The Stoxx Europe 600 index lost 0.3 per cent after the US air strike killed a top Iranian commander in Iraq, prompting Iran to threaten “severe retaliation”.

The German Dax led markets lower, falling 1.25 per cent after data showed that German unemployment rose by more than expected, while airline Lufthansa suffered a 6.5 per cent drop.

In Paris, the Cac 40 finished flat, supported by a 1.1 per cent gain for energy giant Total, though Air France plunged 7.9 per cent. Europe’s travel and leisure sector shed 1.6 per cent on fuel price concerns as oil jumped more than 3 per cent.

Wall Street fell from a record high on Friday after the developments in the Middle East dented the previously bullish mood, while a bigger-than-expected contraction in the US manufacturing sector again fanned fears of slowing economic growth.

Safe-haven assets such as gold surged after the air strike, boosting shares of miners Newmont Goldcorp, Kirkland Lake and Barrick Gold between 0.4 per cent and 1.1 per cent.

Weapons makers Lockheed Martin and Northrop Grumman gained more than 3 per cent after the attack, but the jump in oil prices sent shares of American Airlines and Southwest Airlines lower.

In one bright spot, Tesla rose as much as 5.5 per cent after it beat Wall Street estimates for annual vehicle deliveries and met the low-end of its own target, sending shares to a record high. – Additional reporting: Reuters.

1 How well paid do you think you are? Here’s how to work it out
2 Life as a Facebook moderator: ‘People are awful. This is what my job has taught me’
3 Corona beer firm reeling after 8% slide due to coronavirus
4 Public could face extra charge for electricity under green subsidy scheme
5 Coronavirus and the etiquette of working from home
6 Wall Street hammered on coronavirus fears while Dublin dips 4%
7 AIB to sell more than 500 ATMs to Brink’s
8 Flight attendent seeks High Court injunction against Aer Lingus
9 Wealthy investors’ legal challenge against Revenue fails
10 Coronavirus-induced sell-off wipes €6.7bn off value of shares in Dublin
Real news has value SUBSCRIBE