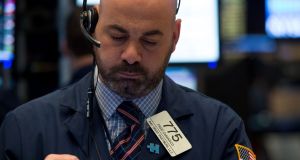 A trader works on the floor of the New York Stock Exchange. Wall Street stocks edged lower in early trading on Friday and were on track to book losses for the week as weak economic data weighed on financial shares. Photograph: Bryan Smith/AFP/Getty Images

European stocks advanced on Friday after their biggest drop since mid-April, as investors searched for fresh triggers for further gains.

On Friday, Britain’s top share index set a record close and flirted with the record mid-session level set in March, as pharmaceutical stock AstraZeneca rose on a positive drug trial.

The Iseq closed down almost 0.9 per cent, going against the positive trend in Europe, as its biggest stocks ended in the red. Cement-maker CRH declined 1.3 per cent to €33.81, while Ryanair slipped 0.5 per cent to €16.78.

Building materials company Kingspan fell 3.4 per cent to €31.60. One of its competitors in the insulation boards market, Recticel, highlighted a shortage of raw material MDI.

Two real estate investment trusts (Reits), Green Reit and Hibernia, were among the few climbers, rising 1.3 per cent to €1.39 and 0.7 per cent to €1.29 respectively.

The blue chip FTSE 100 index finished the week 0.5 per cent higher, at a record close of 7,435.39 points, after its strongest week since December.

AstraZeneca jumped 9 per cent after its key immunotherapy drug durvalumab was shown to reduce the risk of death from lung cancer in a trial. The company hopes that the drug, which offers an alternative to chemotherapy, will deliver billions of dollars in sales.

Shares in peer Shire also rose 1.5 per cent. But healthcare firm Hikma was among the weakest blue chip performers, down 2 per cent at a five-month low and taking losses to nearly 10 per cent over the past two sessions after US approval for its generic drug Advair was delayed on Thursday.

Telecoms companies BT and Vodafone rose 2.7 and 2.3 per cent in concert with European telecoms stocks which were boosted by a merger between United Internet and Drillisch. Shares in Standard Life also rose 1.9 per cent after analysts at RBC raised its rating on the insurer to “outperform”.

On the mid-caps, oil services provider Petrofac plummeted 14 per cent after the firm said Britain’s Serious Fraud Office was questioning its chief executive and chief operating officer in connection with an ongoing investigation into the Monaco-based Unaoil. It dragged the mid-cap index down 0.2 per cent.

The Stoxx Europe 600 Index rose 0.3 per cent at the close, capping a third consecutive weekly advance.

The benchmark index had earlier this week climbed to a 21-month high after the victory for centrist Emmanuel Macron in the French presidential elections spurred investors back into European stocks.

However, it slid 0.5 per cent on Thursday after Bank of England governor Mark Carney said the bank had based forecasts on a “smooth” Brexit and hadn’t run economic modelling for a disorderly exit from the European Union.

Wall Street stocks edged lower in early trading on Friday and were on track to book losses for the week as weak economic data weighed on financial shares. US market investors were in a risk-averse mood this week after President Donald Trump fired FBI chief James Comey.

Banks, which typically benefit from higher interest rates, were the biggest drags on all three major indexes. The S&P 500 financial sector fell 0.7 per cent, while industrials were off 0.8 per cent.

Retail stocks were under pressure yet again after JC Penney reported lower-than-expected comparable store sales, sending its shares down nearly 10 per cent.

GE was on track to be the top percentage loser on the Dow, down 2.7 per cent after Deutsche Bank downgraded its shares to “sell” from “hold”.