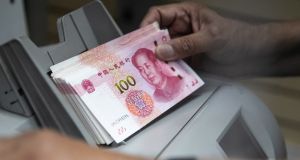 China’s yuan strengthened against the dollar and its exports unexpectedly returned to growth in July. Photograph: The New York Times

European shares enjoyed their best day in around two months as markets rose on Thursday on good trade data from China.

Ingredients and food specialist Kerry Group surged almost 6 per cent after it reported that earnings per share increased 8.4 per cent in the first half of the year. Its stock closed 5.98 per cent up at €109.90, an all-time high for the company.

Ryanair closed 1.75 per cent down at €9.226 in Dublin. Some of its Irish pilots are voting in a ballot on industrial action and the result is due on Friday. UK pilots at the airline confirmed that they would hold two one-day strikes after voting for industrial action earlier this week.

Building materials group and index heavyweight CRH climbed 3.19 per cent to €28.77, outperforming the overall market on the back of positive sentiment towards its industry.

Traders noted that a number of Irish stocks that took a recent drubbing on Brexit fears performed well on Thursday.

Irish builders’ merchant and DIY group Grafton rose 1.17 per cent to 691 pence sterling as construction-related stocks performed well. The company is headquartered in the Republic but listed in London.

Explorer Tullow Oil, which has a key part of its business based in Dublin, advanced 2.34 per cent to 179.35p as oil prices rose.

Hargreaves Lansdown jumped higher after it said inflows of client funds had “held up well” since the Neil Woodford frozen fund scandal erupted earlier this summer. Its shares soared 217p or more than 25 per cent to 2,050p.

Insurer Aviva saw shares nudge higher after it hailed a “steady” performance against a turbulent backdrop in the first half of the year and signalled a possible sale of its Asian business. Shares in Aviva closed up 6.8p or 1.8 per cent at 388.8p.

Elsewhere, Cineworld slipped into the red after it said it hoped upcoming blockbusters, such as the next Star Wars instalment, would offset falling admissions and profits in a weak start to 2019.

Savills moved lower after the property agent posted falling half-year profits on Brexit uncertainty and political unrest in Hong Kong. Shares in the company fell by 2.37 per cent to 925p.

Zurich Insurance Group surged nearly 4 per cent to 345.2 Swiss francs after the insurer said it was set to beat its 2019 financial targets. This sent the Swiss main index 2.3 per cent higher in its strongest day in more than seven months.

But sportswear firm Adidas slumped 2.2 per cent to €267.45 after disappointing second-quarter sales.

Cement maker and CRH rival Lafargeholcim advanced 2.42 per cent to 46.98 Swiss francs as investors tilted in favour of construction stocks.

Kraft Heinz sank as much as 15.6 per cent after it pulled its full-year forecast and wrote down the value of several business units by over $1 billion, capping a rough few months for the company.

Advanced Micro Devices gained 15.4 percent after the chipmaker launched its second-generation of processor chip and said that it had landed Google and Twitter as customers.

Moviemaker Walt Disney rose 2.1 per cent after Credit Suisse upgraded its shares to “outperform” with one eye on the imminent US launch of video streaming service Disney+. – Additional reporting: Reuters