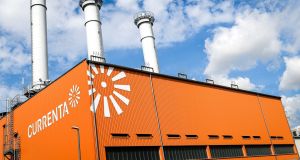 European shares rose on Wednesday, breaking a three-day losing streak on euphoria over a multi-billion dollar German chemical deal, with Flutter Entertainment standing out as one of the main gainers in Dublin as investors welcomed its interim results.

The pan-European Stoxx 600 index closed 0.2 per cent higher, after having gained as much as 1 per cent during the session on news of German pharmaceutical giant Bayer and speciality chemicals company Lanxess’ deal to sell a chemical park operator, Currenta, to funds run by Australian bank Macquarie for $3.9 billion (€3.5 billion).

Flutter Entertainment, formerly Paddy Power Betfair, jumped 6.3 per cent to €71.50, as a 24 per cent drop in the group’s profits was not as bad as the market had feared.

Ryanair advanced 3.5 per cent to €9.39, recovering some of the ground it lost recently, as the group said that its traffic grew 9 per cent in July on the same month last year. It emerged after markets closed that some of Ryanair’s UK pilots are planning to strike.

Still, underlying nervousness across financial markets saw the market interest rate, or yield, on Ireland’s 10-year Government bonds fall into negative territory for the entire session. The yield had temporarily dipped below 0 per cent on Monday as investors globally moved out of stocks and into safe haven assets such as sovereign bonds and gold.

London’s FTSE 100 closed 0.4 per cent higher after a topsy-turvy session as investors composed themselves after sell-offs triggered by worries over the US-China trade dispute and a weaker sterling supported exporter stocks.

In news-driven moves, global commodities trader Glencore weighed on the blue-chip index as it fell 2.5 per cent and hit a near three-year low after reporting an almost one-third drop in core profit.

Valve maker Spirax-Sarco slid 6.4 per cent on its worst day in more than a decade after it warned sales growth at its main business would more than halve in the second half of the year.

Asset manager Standard Life Aberdeen gave up 7.5 per cent despite an increase in first-half assets under management and administration.

Bayer’s 6 per cent jump in Frankfurt was the biggest boost to the main index and helped Germany’s Dax shrug off week industrial output data.

However, all major country indexes in Europe cut some gains, with Italian and Swiss stocks turning negative, after US stocks plunged as investors were spooked by the latest signals from bond markets that pointed to heightened risk of a recession.

Novartis fell after the Swiss drugmaker said it knew about discrepancies in data submitted to regulators as it sought approval of its gene therapy Zolgensma.

In Italy, biggest lender UniCredit lagged after it cut its revenue target for 2019, but a sharp rise in net profit at Italian lender Banco BPM saw its shares post their best day in over a month.

US stocks slipped on Wednesday, as investors reeling from rising trade tensions fled riskier assets for perceived safer havens, leading the bond market to price in a slide into recession.

US Treasury yields took another dramatic drop and the premium on three-month bill rates above 10-year note yields was at its most elevated levels since March 2007. This so-called inversion between the two maturities has preceded every US recession in the past 50 years.

The drop in yields also reflected a jump in expectations that the Federal Reserve would cut key borrowing costs three more times by year-end, with markets fully pricing in a reduction in September.

1 Google tells workers to return to country where they are employed
2 The Devlin hotel operator sues insurer over Covid losses claim
3 Benefacts facing closure due to funding doubts
4 Subway bread too sweet for the Irish tax authorities
5 Recurring Covid restrictions will kill off many viable businesses
6 Citroën’s Irish distributor to relinquish contract
7 CRH finance chief announces surprise exit
8 Pension problems: Workers ‘leaving free money on the table’
9 Probate is changing: What does that mean for you?
10 Irish households continuing to pay back debt, figures show
Real news has value SUBSCRIBE