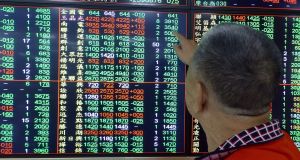 US stocks rose on Tuesday, helped by technology shares, as China stepped in to stabilise the yuan

US stocks rose on Tuesday, helped by technology shares, as China stepped in to stabilise the yuan.

London’s FTSE 100 closed sharply lower, its sixth straight session in the red, bringing its losses to more than 5 per cent since US president Donald Trump announced more tariffs on Chinese exports.

The Iseq index fell by almost 0.5 per cent on wafer-thin trading volumes.

Exploration company Providence Resources fell 1.25 per cent to below 8 cent per share, as it continued to experience pressure following its failure so far to consummate a funding deal with a Chinese company for its Barryroe oil prospect. The company announced a raft of cost cuts and board changes, as it pushed out a deadline to receive the cash form its prospective partner.

Smurfit Kappa Group fell 1.5 per cent to €26.06 per share, after it was fined €124 million by Italian authorities, who found that 50 paper and packaging groups, including the Irish group, had engaged in anti-competitive practices.

Cairn Homes, meanwhile, was one of the few Irish shares that turned in a solid performance, rising more than 1.5 per cent to €1.04.

London’s FTSE 100 index, packed with miners and commodity-focused firms who are heavily exposed to Chinese demand, fell 0.7 per cent to a two-month low. Engine maker Rolls-Royce slumped 7 per cent, its biggest one-day fall since 2015, after it raised cost estimates to tackle problems relating to its Trent 1000 engines, which have caused airlines to ground Boeing 787s while repairs are carried out.

Fashion retailer Boohoo added 4.1 per cent after sealing a deal to buy the online businesses of fashion chains Karen Millen and Coast.

Fertilizer maker Sirius Minerals, however, slumped nearly 29 per cent to a more than four-year low after it suspended a planned $500 million bond sale central to the funding of its Polyhalite mining project in northeast England.

Germany’s DAX reversed a 1 per cent jump to close down 0.8 per cent. Metro was the worst performer on the main index, down 8.1 per cent after Czech businessman Daniel Kretinsky’s investment vehicle confirmed it would not raise its €5.8 billion bid for the German retailer.

Vivendi shares jumped on news that it may sell a 10 per cent stake in Universal Music Group to Chinese tech group Tencent, while industrial group Rotork topped STOXX 600 on posting strong first-half results.

By mid-afternoon, the technology sector, which includes companies that have a big exposure to China and were at the heart of Monday’s sell-off, rose 1.05 per cent, the most among major S&P sectors.

The materials sector dropped 0.78 per cent, weighed by a more than 10 per cent drop in scent and flavour maker International Flavors & Fragrances and fertilizer company Mosaic after the two companies cut full-year earnings forecasts. Payments processor Mastercard gained 2.1 per cent after it said it would buy a majority of the corporate services businesses of Scandinavian payments group Nets for about $3.19 billion.

Walt Disney Co was up 0.7 per cent ahead of its results after market close.

1 47,000 homes need to be built each year to solve housing crisis, report says
2 Jervis shopping centre takes major tenants to court over rent disputes
3 How Argentina and its creditors thrashed out a $65bn deal
4 Seán FitzPatrick makes fresh bid to secure planning for new Greystones home
5 Hairdressing 7% more expensive in July as prices declined across economy
6 Digital pollution: ‘We have a pandemic of data and 90% of it is crap’
7 Dogpatch Labs and SOSV shortlisted to win NDRC contract
8 New home completions drop 32% in second quarter
9 Can Covid free your workplace of bureaucracy?
10 Shed Distillery in Leitrim to open €3m visitor centre next month
Real news has value SUBSCRIBE