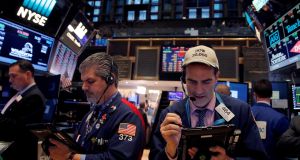 In an indication of a positive start on Wall Street, the S&P 500 e-mini futures gained 0.12 per cent.

Asian shares scaled an 18-month high on Friday while oil prices stayed buoyant in a holiday-shortened week, as investor optimism improved on hopes a US-China trade deal would soon be signed.

Traders returned from their Christmas and Boxing Day break to digest comments from Beijing that it was in close contact with Washington about an initial trade agreement, shortly after US President Donald Trump talked up a signing ceremony for the recently struck Phase 1 trade deal.

In early European trade, the pan-region Euro Stoxx 50 futures added 0.4 per cent, German DAX futures rose 0.6 per cent while FTSE futures were up 0.5 per cent.

In an indication of a positive start on Wall Street, the S&P 500 e-mini futures gained 0.12 per cent.

Japan’s Nikkei was off 0.4 per cent, but on track for a near 19 per cent rise this year, matching the annual increase of 2017.

Australia’s benchmark index rose 0.4 per cent. Chinese shares gave up early gains with the blue-chip CSI300 down 0.1 per cent.

The rally in global share indices is in sharp contrast to a plunge late last year when fears about the impact of the Sino-US trade war had sapped investor confidence.

The worries scuttled capital expenditure plans over much of 2019, but strong employment and signs of an improving global economy suggest that will change next year.

The US Federal Reserve’s policy easing, economic data that has come in above low expectations, and corporate profits have helped lift stocks this year along with trade-related optimism.

Market participants are now waiting for fourth-quarter financial results to be announced in January for indication on whether sentiment among corporates has actually improved.

On Thursday, MSCI’s all-country world index and Wall Street’s Dow Industrials, the benchmark S&P 500 and the technology-rich Nasdaq all closed at record highs.

MSCI’s gauge of stocks across the globe gained 0.38 per cent to a record, on track for its best year since 2009. The index has gained 24 per cent this year.

Both oil and gold held on to their recent gains.

Brent crude, the global benchmark, extended gains into a fourth session, hitting $68.10 per barrel, the highest since mid-September. US West Texas Intermediate crude gained 11 cents to $61.79 a barrel.

Brent has rallied about 25 per cent in 2019, supported by supply cuts by OPEC and allies including Russia.

Gold prices were a bit shy of a two-month high at $1,509.22 an ounce. They have been on the rise recently as a hedge against dollar weakness and increased equity market volatility in 2020.

The rally in oil and gold boosted commodity-linked currencies in the past 24 hours with the Australian and New Zealand dollars soaring to their highest since late-July at $0.6956 and $0.6681, respectively.

The US dollar was a tad weaker against the Japanese yen at 109.48.

The dollar index was a shade weaker at 97.440 against a basket of six major currencies, with the euro up a notch and the British pound mostly flat. – Reuters