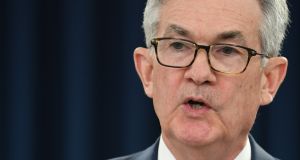 Federal Reserve chairman Jerome Powell. He said a full economic recovery was unlikely until the public was confident that Covid-19 was under control. Photograph: AFP via Getty

European shares rose for a second day on Wednesday as expectations of further US economic stimulus offset fears of a new wave of Covid-19 outbreaks after Beijing returned to lockdown.

On Wall Street, investors also weighed a Tuesday warning by Federal Reserve chairman Jerome Powell, who said a full economic recovery was unlikely until the public was confident that the disease was under control.

The Iseq closed up 0.7 per cent as many Irish equities joined in the cautiously positive sentiment across Europe, although some stocks were unable to hold on to their early gains.

Building materials group CRH shed its gains to finish lower, closing down 0.4 per cent at €31.94. It was a similar pattern for Ryanair, with the airline declining 0.3 per cent to €11.06.

However, there were better fortunes for Glanbia, which advanced 4 per cent to €11.34, and Cairn Homes, which rose 1.9 per cent to 91 cent.

The FTSE 100 rose for a second straight day as a series of upbeat corporate earnings bolstered hopes of an economic recovery, but the index ended with a fraction of the session’s gains as fears of a second wave of Covid-19 persisted.

The blue-chip index gained as much as 1.1 per cent during the session but pared gains to close up just 0.2 per cent. Declining oil prices weighed on energy stocks, while banks and insurers also fell.

Topping the FTSE 100 was renewable power generator SSE, which surged 8.8 per cent to its highest in three months after beating annual profit estimates.

Online fashion group Boohoo surged 5.5 per cent as it forecast annual results ahead of market expectations. However, Domino’s Pizza slumped 6 per cent after saying its first-half core earnings would be hit by additional costs.

The pan-European Stoxx 600 index rose 0.7 per cent, adding to the previous session’s strong gains on reports that the Trump administration was preparing a nearly $1 trillion infrastructure proposal.

Healthcare stocks remained in focus after trial results on Tuesday showed that a cheap and widely used steroid called dexamethasone became the first drug shown to be able to save the lives of Covid-19 patients.

The S&P 500 and the Dow Jones were largely flat in early trading as a record rise in coronavirus cases in six US states dented sentiment following a three-day rally on hopes of a swift recovery from the coronavirus-driven downturn.

Cruise operator Norwegian Cruise Line Holdings tumbled about 6.7 per cent as it extended the suspension of its voyages through September end due to the virus outbreak. Peers Carnival Corp and Royal Caribbean Cruises also dropped 6.1 per cent and 7.8 per cent each.

The Nasdaq was up 0.5 per cent, with Apple, Microsoft and Amazon. com providing the biggest boost. Energy and utilities led losses among the major S&P sectors.

Oracle fell 4.2 per cent after its quarterly revenue missed estimates as the pandemic led clients in the hospitality, retail and transportation sectors to postpone purchases. – Additional reporting: Reuters.