The Iseq index down 0.3 % with Origin Enterprises 4.6% lower after latest results 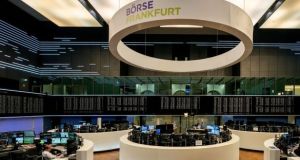 European stocks fell on Thursday after three straight sessions of gains as a jump in US bond yields knocked risk appetite globally, with heavyweight miners and travel stocks leading the retreat.

The pan-European STOXX 600 index fell 0.5 per cent in early trading, with miners dropping 2.8 per cent and travel & leisure stocks down 1.6 per cent. UK-listed shares of Rio Tinto and BHP Group shed 5.2 per cent and 4.3 per cent respectively, after their Australia-listed stocks were hit by ex-dividend trading.

German airline Lufthansa dropped almost 2 per cent after it posted record losses for 2020 and trimmed its 2021 capacity plans as Covid-19 disruption drags on.

In Dublin, the Iseq index was down 0.3 per cent in early trading with Origin Enterprises 4.6 per cent lower after its latst results.

In London, the blue-chip FTSE 100 index slid 0.5 per cent, with mining stocks, including Rio Tinto, Anglo American, and BHP, leading the declines.

The domestically focused mid-cap FTSE 250 index fell 0.5 per cent. Ladbrokes owner Entain lost 2 per cent after it held back declaring a dividend despite reporting a jump in 2020 earnings. It also said it was expecting online volumes to ease when shops re-open after surging during lockdowns.

The 10-year US Treasury yield, the benchmark for global borrowing costs, rose past 1.45 per cent on Wednesday as investors anticipated a rise in inflation with governments continuing to pump money into the global economy and as vaccination programmes progress.

Investors are waiting to see if Federal Reserve chairman Jerome Powell will address concerns about the risk of a rapid rise in long-term borrowing costs later in the day.