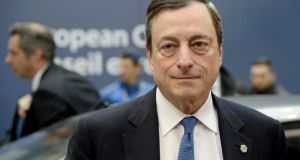 The Iseq in Dublin advanced by 1 per cent yesterday while UK stocks climbed to a 2008 high. The FTSE 100 in London added 0.3 per cent, as did the broader FTSE All-Share Index.

US stocks also rose, fuelled by gains in the energy sector and speculation that upcoming first-quarter earnings reports might not be quite as bad as previously thought. All 10 major S&P 500 sectors rose, with the energy index up 1.89 per cent. US crude jumped more than 4 per cent after a lower-than-expected build of stockpiles. DUBLIN Tullow Oil, which is also listed in London, jumped 11 per cent on the Iseq after Goldman Sachs upgraded the stock and said mergers and acquisitions will drive the energy industry. Tullow’s share price has halved, along with many of its peers, since the price of oil began to slide last summer. The company is seen as the most likely takeover target in the oil industry in Europe.

Smurfit Kappa Group fell back by 2.6 per cent to close the session at €28.85, paring back some of its gains from earlier in the week. The company has also been the subject of takeover speculation over the last week, but it issued a statement indicating it would not address the rumours at its investor day in Holland this week.

Ryanair was one of the more heavily traded stocks in Dublin but ended the session down more than 1 per cent to close at €11.18. LONDON Burberry added 2.5 per cent after the British maker of £1,500 trenchcoats said second-half sales gained 10 per cent. The miner Fresnillo rose 2.2 per cent after saying silver output rose 19 per cent in the first quarter and after keeping its full-year outlook. Anglo American and Glencore gained at least 1.5 percent.

Next added 2.5 per cent after JP Morgan raised its rating to the equivalent of a buy. Dixons Carphone climbed 2 per cent after saying it will sell its German electronic retailer The Phone House to Drillisch. EUROPE Alcatel-Lucent tumbled 16 per cent after Nokia agreed to buy it in a deal that valued the French company at less than its last closing price. Nokia lost 1.5 per cent, reversing earlier gains. It will probably have to pass a US national security review before the purchase, according to reports.

AstraZeneca rose 1.2 per cent after US advisers said the cardiovascular risk of diabetes drugs made by the company and Takeda Pharmaceutical is acceptable. The clothing retailer H&M advanced 1.5 per cent after reporting March sales that beat analyst projections.

Sika slid 3.6 per cent after a shareholder debate over the founding family’s plans to sell it to Saint-Gobain against the wishes of the management and some other investors.

Delta Air Lines’ first-quarter profit topped expectations one of many industrial and transportation companies that benefit from cheap oil and its derivatives. Its stock rose 2.6 per cent to $44.20.

Intel jumped 4.26 per cent to $32.83 after it said late on Tuesday it expects flat revenue for the entire year, despite some weakness in the first quarter.

Bank of America’s shares were down 1.14 per cent at $15.64. The number two US bank by assets’ first-quarter profit narrowly beat analysts’ estimates.

HCA Holdings’ shares were up 2.46 per cent at $79.24 after the hospital operator said it expects first-quarter results above analysts’ expectations.