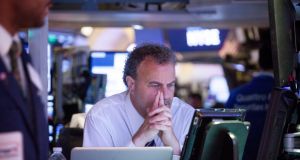 A trader works at the New York Stock Exchange

Political stability in Europe with the success of President Emmanuel Macron’s party in the French legislative elections buoyed markets, while speculation around the Government’s Help-to-Buy scheme affected property companies at home.

The Iseq Index outperformed its European counterparts on Monday, finishing the day up 0.5 per cent.

Ryanair finished up just under 1 per cent. “Airlines across the board in Europe were strong, possibly on the back of lower oil prices, and Ryanair benefited from that,” said an analyst with Davy.

Building materials groups were up quite strongly, with CRH finishing the day up 1.5 per cent, mainly on the back of strong US markets. “CRH of late has been trading in tandem with any news on US infrastructure,” said an analyst with Davy. Grafton was also up about 1.5 per cent, outperforming indexes.

Speculation that the Government might be about to scrap the Help-to-Buy scheme was “definitely a talking point”, Davy said. “Clients are wondering how it’s going to affect property names.” Hibernia Reit was down nearly 3 per cent, while Green Reit and Ires Reit held out.

The Davy analyst said the banking sector was “generating a lot of interest” ahead of the upcoming IPO of AIB, and Bank of Ireland was up 2 per cent.

Elsewhere, bookmaker Paddy Power Betfair was down 1.8 per cent.

The FTSE 100 followed European equities higher as the success of President Macron’s party in the French legislative elections convinced investors of growing political stability on the continent.

Sterling weakness also buoyed the FTSE 100, as listed multinational firms tend to benefit when earnings in foreign currencies are stronger. The pound was down 0.3 per cent versus the US dollar at 1.273, but was flat against the euro at 1.141.

In UK stocks Sainsbury shares were one of the best performers on the FTSE 100, rising 5.7p to 258p after reports emerged the supermarket has tabled a £130 million bid to acquire convenience store operator Nisa.

US stocks were higher in late morning trading on Monday, with the S&P 500 and Dow Jones Industrial Average hitting yet another record high as technology stocks rebounded after recent losses.

The S&P technology sector is coming off its second straight weekly decline, triggered by fears of stretched valuations and investors moving money to other sectors. Tech stocks have led the S&P 500’s rally this year.

Leading the recovery, Apple rose 2.6 per cent, providing the biggest boost to the three major sectors. Microsoft and Alphabet were also up. The tech sector’s 1.37 per cent rise led the gainers on the S&P 500, putting it on track for its biggest one-day percentage rise since March.

“Some of it is folks taking a second look at names that may have been unduly punished in the rotation out of tech that started about 10 days ago,” said David Lefkowitz, senior equity strategist at UBS Wealth Management Americas in New York.

Consumer staples stocks, which were battered on Friday after Amazon. com’s $13.7 billion deal to buy upscale grocer Whole Foods, added to their losses.

The success of Mr Macron’s party in legislative elections convinced investors of growing political stability on the continent. The French Cac 40 and German Dax rose by 0.9 per cent and 1 per cent, respectively

David Madden, a market analyst at CMC Markets UK, said: “News that Mr Macron’s party took the majority of the seats in the French assembly was welcomed by traders as it represents political stability in one of the biggest counties of the EU.France’s economy didn’t fare too well under Francois Hollande, and investors are optimistic about the new French leader.” – Additional reporting: Agencies