Little change in markets ahead of US results

Ryanair up 1.03% in busy day’s trading in aviation stocks across Europe and the US 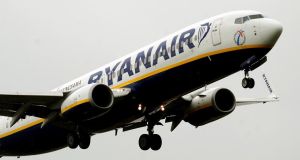 In Dublin, Ryanair was up 1.03 per cent to €6.80 in a busy day’s trading in aviation stocks across Europe and in the United States. Photograph: Rui Vieira/PA Wire

Investors took the opportunity to reflect yesterday on recent gains, particularly with the US corporate results season looming into view.

China’s second quarter GDP figures are also due in coming days, meaning traders have been content to take money off the table.

In Europe, Germany’s Dax and France’s Cac 40 were ahead. The FTSE 100 was dragged down by poorly received updates from insurers Aviva and Admiral, which led the fallers’ board. Markets elsewhere enjoyed a more resilient session, with the Dow Jones ahead at the time of the close in Dublin.

National benchmark indexes rose in 10 of the 18 western European markets. The Cac and Dax both added 0.4 per cent, while the FTSE 100 lost 0.3 per cent.

DUBLIN In Dublin, the Iseq index finished up 0.33 per cent of 15.17 points at 4,682.27. CRH put in a strong performance, rising 1.24 per cent to €19.04. Providence Resources, the resource stock led by Tony O’Reilly jnr, took a 9.48 per cent tumble to €1.60. The stock updated the market yesterday that work at its Spanish point project has been delayed. Stockbroker Davy described the news in a note as “widely expected” but a “disappointment nonetheless”.

Independent News & Media was down 1.31 per cent to 15 cent. The stock is seen as marking time by brokers who await news of the appointment of a new chief executive. Ryanair was up 1.03 per cent to €6.80 in a busy day’s trading in aviation stocks across Europe and in the United States. Paddy Power was down 1.91 per cent to €48.84, extending falls in the stock from the heights of €67.00 a year ago. Broker reports that rival Betfair was continuing to making ground weighed on the Irish gambling stock yesterday.

LONDON Blue-chip shares remained stuck in reverse gear as a rapid turnaround in fortunes for London’s top-flight showed little sign of coming to an end.

The FTSE 100 Index posted its third daily fall in a row, shedding 20.4 points to finish at 6718, more than 2 per cent lower than its level at the close last Friday.

In London, Admiral shares were down 3 per cent after the car insurer reported a 9 per cent slide in its premium income for the first six months of this year, as it counted the cost of a downward spiral in industry pricing over the last year.

Airline stocks were back in favour after a slump in the previous session sparked by a profits warning from Air France-KLM. British Airways owner International Airlines had lost 7 per cent of its value but in the latest session gained 4.1p to 340p, while easyJet topped the risers board with a lift of 39p to 1287p.

Aviva was the biggest faller in the top flight, losing nearly 4 per cent as chief executive Mark Wilson set out new targets on cash flow and operating expenses.

The Stoxx Europe 600 Index slipped less than 0.1 per cent to 339.96 at the close of trading, its lowest level since May 20. The gauge fell 1.4 per cent yesterday after Air France-KLM Group cut its profit forecast and as investors weighed equity valuations that are near the highest multiples since 2009.

NEW YORK US rose yesterday, rebounding from a sharp two-day slide after an early reading on earnings beat expectations.

Alcoa, one of the S&P 500’s biggest advancers, was up 5.7 per cent to $15.70 a day after the US aluminium producer reported adjusted second-quarter earnings and revenue that topped Wall Street’s forecasts.