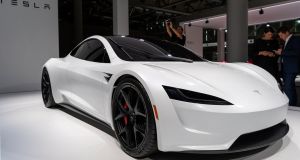 In New York, Tesla rose 5.7 per cent after analysts said the electric carmaker was on track to be profitable and cash flow positive in the second half of the year. Photograph: Georgios Kefalas/EPA

Investors’ increasing optimism that the Italian government’s 2019 budget will respect European Union fiscal rules pushed up European banks across the board.

US stocks retreated as tech stock weakness and lingering concern over trade tensions with China weighed on investor optimism.

AIB rose more than 1 per cent to €4.61, while Bank of Ireland rose 2.3 per cent to €7.35, as the optimism that swept the European banking sector reached Dublin.

GAN, the gaming software company founded and backed by members of the Smurfit family, rose more than 14 per cent to 78 cents per share. It spiked after Paddy Power’s Fanduel launched online services in new Jersey, powered by GAN’s software. It highlighted GAN’s potential prospects in the US as the gambling market there is liberalised.

Ryanair fell more than 2.4 per cent to close at €13.20. It is under pressure ahead of its AGM this month over governance concerns surrounding its board composition. On Monday, it announced a ban on journalists attending its annual meeting.

The pound hit five-week highs after the EU’s chief Brexit negotiator Michel Barnier told a forum in Slovenia that a divorce deal with Britain could be agreed in six to eight weeks if negotiators were realistic in their demands.

Britain’s Barclays and Lloyds rose 1.3 and 1.1 per cent respectively.

Packaging firm RPC topped the FTSE 250, soaring 18 per cent after it said it was in talks on a possible sale to Apollo Global Management and Bain Capital.

Among other notable fallers on the FTSE 100 were miners Fresnillo and Glencore, down 2.6 and 1.8 per cent respectively as copper prices slid after the US threatened to impose tariffs on virtually all Chinese imports.

Among small-caps, department store operator Debenhams fell more than 10 per cent after weekend reports that management has called in KPMG to advise it on its options.

The pan-European Stoxx 600 index had a strong start to the week, gaining 0.5 per cent after ending Friday near its lowest since early April. Germany’s DAX was up 0.22 per cent while France’s CAC closed up 0.33 per cent.

Italian banks rose as the country’s government bonds rallied after Giovanni Tria predicted yields would drop when the government laid out its budget for 2019. Shares in Intesa Sanpaolo, Banco BPM, and Mediobanca all rose more than 4 per cent.

Richemont rose 1.1 per cent after the Cartier watchmaker appointed a new chief executive and posted a 10 per cent rise in five-month sales.

A number of companies said the proposed new US-China tariffs would weigh on business. Among them was Apple, which said a “wide range” of its products would be hit, although it did not mention the iPhone. Bank of America Merrill Lynch estimated iPhone prices could go up by about 20 per cent if they were assembled in the United States, instead of abroad. Apple shares dropped 1 per cent, giving up their premarket gains and weighing on the three major indexes.

Nike rose 2 per cent, the most on the Dow, after a report said the footwear maker’s Labor Day sales rose, easing concerns about the hit to demand after the Colin Kaepernick advertisement.

Insurers Travelers fell 1.9 per cent and UnitedHealth dropped 2.7 per cent, the most on the Dow, as forecasters said Hurricane Florence is “expected to become a major hurricane very soon” as it bore down on the east coast.

Tesla rose 5.7 per cent after analysts said the electric carmaker was on track to be profitable and cash flow positive in the second half of the year.

Alibaba dropped 3 per cent after the company said Jack Ma would step down as chairman in one year. – (Additional reporting: Reuters/Bloomberg)