Indonesia, Russia and Mexico all under pressure 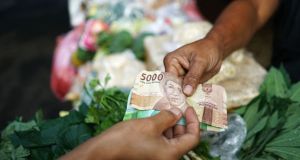 The emerging market sell-off sparked by Turkey and Argentina’s twin currency crises deepened on Wednesday, sending developing world equities back into a bear market and stirring concerns of a broader crisis.

The FTSE Emerging index of nearly 800 of the biggest companies in the developing world fell 1.6 per cent, its sixth straight decline and the biggest in three weeks, which pushed the benchmark to its lowest since July 2017.

Indonesia’s rupiah traded close to its weakest level since the 1998 Asian financial crisis, while the South African rand slipped to a record low after data on Tuesday showed the country’s economy had contracted for the first time since 2009, exacerbating concerns over the developing world more broadly.

The broader EM index has again slumped more than 20 per cent since its January high, the typical definition of a bear market. Analysts are questioning whether the rout merely reflects a series of one-off hits or indicates a broader malaise.

“We’ve had a series of idiosyncratic shocks, but this week it has felt like more of a generalised sell-off than an idiosyncratic one,” said Gene Frieda, a strategist at Pimco. “Some investors just want to get out now.”

While homegrown problems in both Turkey and in Argentina have made them the weakest links across EM this year, there are signs that investors are now looking to reduce their broad exposure to currencies, stocks and bonds in the developing world.

The Turkish lira and Argentine peso enjoyed some welcome stability on Wednesday, helping JPMorgan’s index tracking EM foreign exchange to climb 0.1 per cent, but bourses in the developing world enjoyed no respite.

Amid fears of broader contagion from the sell-off, European shares retreated 0.7 per cent and the S&P 500 index dipped 0.3 per cent by midday in New York.

“People are now looking beyond idiosyncratic issues and more generally at spillover and contagion, and which economies are most vulnerable,” said Dwyfor Evans at State Street Global Markets.

The rise in the US dollar since April has exacerbated troubles in several emerging economies, where the amount of dollar-denominated debt has more than doubled to $3.7 trillion (€3.19 trillion) over the past decade, according to the Bank for International Settlements.

Climbing US interest rates and the Federal Reserve slowly trimming its balance sheet of bonds acquired in the wake of the financial crisis has both supported the dollar and increased pressures on emerging markets, according to analysts.

Mark Tinker, a fund manager at Axa, pointed out that the Libor interest rate – which constitutes the “raw material” of the financial system – has almost doubled in the past year. “What we are seeing in the markets at the moment are the natural consequences of tightening US monetary conditions,” he said.

At the same time, the trade tensions that threaten to slow the global economy are again in focus. A consultation period on US president Donald Trump’s proposal to impose tariffs on $200 billion more of Chinese exports expires on Thursday.

Combined with a rising oil price – which helps energy exporters but hurts most developing countries – this could shave as much as 1.5 percentage points off EM economic growth this year, according to Goldman Sachs.

Although Asian markets have so far fared better than their EM peers, analysts caution that the region has its own problems. Strategists at Morgan Stanley said the stable renminbi had bolstered Asia over the past month, but added that “risks are building” in Asian currency markets.

They said a pick-up in trade tensions would “not help these markets either”, but pointed out that the impact could be mitigated to some degree if the People’s Bank of China managed to keep the renminbi in check.

“The momentum right now is quite strong, so you don’t want to stand in front of it,” said Tai Hui, chief market strategist for Asia-Pacific at JPMorgan Asset Management.