Netflix jumps 3% in US; declines in CRH and Ryanair pull Iseq down 0.5% 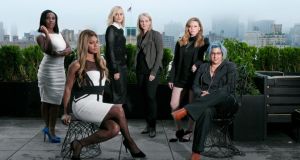 European stocks rose yesterday as investors awaited a decision from the US Federal Reserve about scaling back economic stimulus.

The Iseq bucked the trend, however, sliding by 0.5 per cent after declines in CRH and Ryanair, two of its most heavily weighted stocks.

US stocks fluctuated in the afternoon, following two days of gains, over the speculation surrounding the Fed and also because the cost of living rose more than forecast in May.

DUBLIN The Iseq was dragged down by declines in CRH, the most heavily weighted stock on the index, and Ryanair, the third most weighted.

CRH fell back by 0.76 per cent to close the day at €20.33. The stock traded down as much as 2.2 per cent in heavy trading in the morning, according to dealers, before regaining some of its lost ground in the afternoon. The stock is seen by many as a defensive play on the US recovery, and is sensitive to economic data from the US.

Ryanair started the morning well, up 0.5 per cent in early morning trading, but it closed the day down 0.66 per cent at €7.06. Davy yesterday upgraded Ryanair’s rival, Easyjet, predicting a good summer for the UK airline. Ryanair is currently in the middle of a strategic overhaul that many observers say replicates Easyjet’s strategy.

Kerry group was traded heavily all day, particularly in the afternoon. It closed up more than 2 per cent at €56.73.

LONDON Shire increased 3.5 per cent to 3,660 pence. The pharmaceutical company has hired Citigroup to defend it from any takeover bids, Reuters reported. The company is tax resident in Ireland, having domiciled itself here in 2008.

Whitbread rose 2.2 per cent to 4,259 pence. Comparable sales at its Premier Inn hotel chain jumped 9.5 per cent in the first quarter, topping analysts’ projections of a 7 per cent gain. Sales climbed 4.5 per cent at Costa, exceeding estimates of 4 per cent.

EUROPE Subsea 7 retreated 2.2 per cent to 124 kroner. Berenberg cut shares of the offshore oil-services provider, saying its order backlog will decline after it lost project opportunities in West Africa to rivals in the past year.

Rheinmetall added 2.5 per cent to €50.92. The German automotive and defence equipment supplier was upgraded by Berenberg Bank. Orders from international customers will bolster sales at the company’s defence division, while the automotive business will continue to benefit from growth in global auto production, said the bank.

Maersk lost 5.3 per cent to 13,290 kroner. The Chinese Ministry of Commerce said the proposed P3 vessel-pooling accord, which also included Mediterranean Shipping and CMA CGM, would curb competition on Asia-Europe routes. US Medtronic gained 2 per cent to $61.23. Morgan Stanley upgraded the maker of medical devices, citing potential returns from its deal to buy Covidien. Credit Suisse and RBC Capital Markets also recommended buying the stock.

Netflix jumped 3 per cent to $443.15 as Morgan Stanley recommended buying shares in the video-streaming service.

Expedia jumped 3.3 per cent to $77.06, the highest level since March. Susquehanna upgraded the shares to the equivalent of a buy, from neutral.

It increased its price target to $90 a share from $79, citing likely growth in Travelocity, Trivago and Expedia’s core business.