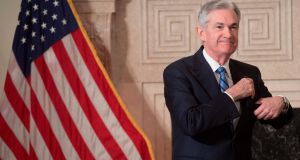 Jerome Powell, sworn in as new chairman of the Federal Reserve. Photograph: AFP/Getty

Wall Street stocks extended losses on Monday in rollercoaster trading as concerns grew that strength in the US economy would result in rising inflation.

The Dow Jones Industrial Average shed more than 1,500 points – or 6 per cent – in late afternoon trading, putting the blue chip index on track for its biggest one-day drop in points terms on record.

Investors attributed much of the new wave of selling to a robust reading of the US service sector, which expanded in January.

“This is a case of when good data spells trouble for equity markets,” said Michael Underhill, chief investment officer at Capital Innovations. “We will see increased volatility as we get into this late stage of the economic cycle.”

Global share markets began sliding on Monday in Asia and gathered pace in Europe and London as investors reacted to Wall Street’s worst trading day in two years on Friday.

The Vix volatility index, widely known as Wall Street’s fear gauge, hit 22.88, its highest level since the days before Donald Trump’s election as US president in November 2016.

In a press briefing on Air Force One for a presidential trip to Ohio, Mr Trump’s principal deputy press secretary, Raj Shah, was asked if the falling equity markets would have long-term effects on the president’s economic agenda. He said: “Look, markets do fluctuate in the short term, I think we all know that. But the fundamentals of this economy are very strong.”

Bond markets found a measure of support on Monday, helping the US 10-year yield ease back to 2.82 per cent. The benchmark had reached a high of 2.88 per cent earlier in the day. It started the year at 2.43 per cent.

Bond markets have come under increasing pressure this year as economic sentiment has improved and central banks have started to unwind some of their post-crisis monetary stimulus. A surge in US wages revealed in data on Friday and robust economic growth raise the possibility that the Federal Reserve could look to tighten monetary policy this year more aggressively than anticipated.

US Treasury prices also have been hit by expectations that the US deficit will rise because of the recent tax cuts, leading to more government borrowing. In turn, this has hit stock market. Rising bond yields can undercut equities by lifting borrowing costs for companies and making returns from stocks look relatively less attractive.

Oil prices also fell, with Brent crude down 1.8 per cent to $67.37 a barrel, the biggest decline in more than a month.

David Kelly, chief global strategist at JPMorgan Asset Management, disagreed with the “popular narrative” that equities have been “tanking” because of fears that interest rates would rise due to higher inflation.

“The somewhat untidy but nevertheless more plausible explanation is that both the bond market and stock market were overdue for a correction after a remarkably placid two years,” Mr Kelly said.

Europe’s Stoxx 600 benchmark index fell as much as 1.7 per cent with financial, technology and resource stocks all hit. Big euro zone markets are now negative for the year.

In Asia, the sell-off was also fuelled by the view that equity markets’ stellar start to the year could soon run out of steam.