In Dublin, the Iseq index finished the session up 0.5% 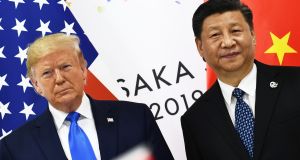 London’s Ftse 100 rose on Friday on the news of a new stimulus plan from China, while US stocks also edged higher.

The Iseq index finished the session up 0.5 per cent. Packaging company Smurfit Kappa rose 3.5 per cent to close in Dublin at €29.02. It was also the top performer on the Ftse 100 via its London listing, as its latest bond offering at attractive rates incited demand from yield-starved investors.

Cairn Homes rose 3.3 per cent to €1.11, ahead of its interim results next week. Analysts from Davy predicted a strong set of figures and a positive outlook on future sales. Its industry peer, Glenveagh Homes, also tacked upwards, rising 3.3 per cent to 69 cents.

The main index’s gains were kept in check by oil heavyweights BP and Shell, which tracked a fall in crude prices, and utilities that slipped on the prospect of renationalisation if a Labour government took power in Britain.

Shares of SSE, Centrica and Severn Trent shed roughly 2 per cent. A snap election remains a possibility as lawmakers prepare for a showdown over delaying Brexit.

United Utilities lost 2.9 per cent as a rating and price target downgrade from RBC also weighed on the stock.

Connect Group announced that its Smiths News business has confirmed a deal to distribute the Daily Telegraph and its Sunday sister paper. Shares were down 0.5p to 38.5p.

The benchmark Stoxx 600 index rose 1.7 per cent for the week, its third weekly gain in a row.

Fresh data on Friday showed an unexpected fall in German industrial output in July, adding to signs that manufacturers in Europe’s biggest economy are struggling. Germany’s Dax, however, was the outperformer with a 0.5 per cent rise.

It was helped by Thyssenkrupp shares, which jumped 5 per cent to a two-month high after Finland’s Kone said it and a private equity partner would bid for the elevator business.

Auto shares, despite cutting some gains on news of US probe against four automakers, notched their biggest weekly gain since early April. Shares of BMW and Volkswagen closed nearly flat after reports the US Justice Department was investigating a decision of the automakers to reach a voluntary agreement with California to adopt state emissions standards violated antitrust law.

Norway’s Telenor fell 3.4 per cent after it scrapped a plan to create a telecoms joint venture with Malaysia’s Axiata Group.

Heading into afternoon trading, the Dow Jones Industrial Average rose 0.23 per cent, the S&P 500 gained 0.18 per cent, and the Nasdaq Composite added 0.06 per cent.

The communication services sector was the biggest drag among the 11 major S&P sectors, pulled lower by Facebook shares, which fell 1.9 per cent after several US state attorneys-general said they would investigate the social-media giant over whether it stifled competition and put users at risk.

Among stocks, Boeing and United Health rose about 1 per cent and were the biggest boosts to the Dow.

Marathon Oil was down about 2 per cent after Goldman Sachs cut its price target on the stock.