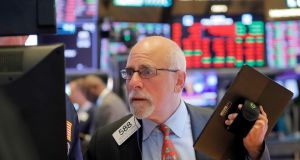 A trader on the floor of the New York Stock Exchange shortly after the closing bell in New York. Photograph: Lucas Jackson/Reuters

European shares rose for a second straight day on Thursday, after China said it would hold trade talks with the United States, raising hopes that the two countries would make progress on a dispute that has put major economies at risk of recession. The announcement that top negotiators from the US and China will meet early October in Washington raised hopes of a possible resolution to the two countries’ brutal trade war, which has wreaked havoc on the global economy.

“Optimism rules the day on the potential for some sort of trade deal between now and year-end,” said Peter Tuz, president of Chase Investment Counsel in Charlottesville, Virginia. “People had been pessimistic but moods can shift in a second, and they have.

“We’re in a headline-driven market and the headlines over the last couple of days have been pretty positive.”

The Iseq ended the session 1.1 per cent up, but on the lower side of gains seen around Europe. The springer in the market was Bank of Ireland, which like other financials has been buffeted in recent weeks from the Brexit turmoil. However, moves by the UK to legislate against a no-deal scenario saw the bank’s shares rise 8.5 per cent to €3.84 while rival AIB enjoyed a near 5 per cent hike to €2.46. Housing-related stocks Cairn Homes and Glenveagh rose 2.9 and 2.7 per cent respectively amid a similar Brexit-related bounce. Ryanair and Smurfit Kappa also enjoyed the positive stock market vibe, rising 1.1 per cent and 2.2 per cent. The overall index, however, was anchored by building materials giant CRH, which was trading ex-dividend at €30.63, marginally down on the day. Defensive food stock Kerry was similarly weak, closing flat at €109.40.

Sterling’s rally held back London’s top shares again on Thursday, after more political upsets prompted traders to hope for more roadblocks in the way of a hard Brexit. The resignation of Boris Johnson’s brother, Jo, as both a minister and MP added an extra boost to the pound following a series of House of Commons defeats reduced the chances of a no-deal Brexit on October 31st. The Ftse 100 dropped 40.09 points, or 0.55 per cent, to 7,271.17. It was behind its European peers, however. In company news, turnaround specialist Melrose saw shares jump 16.3p higher to 201.8p after it unveiled narrowed losses thanks to a doubling of revenues led by its controversial £8 billion takeover of GKN. Shares in CYBG have hit a record low of 108.3p after the bank warned it would take a hit of up to £450 million on payment protection insurance costs. By the time the market closed, shares were down 29.95p at 110p. High-street retail giant Dixons Carphone suffered a stinging shareholder revolt over pay after almost a quarter of investors rebelled at the company’s annual general meeting. Shares were up 1.4p to 115.5p at the end of the day.

European and emerging markets stocks jumped on hopes that next month’s US-China trade talks would move the world’s two largest economies closer towards ending their cantankerous dispute, which has pushed major economies towards recession. The pan-European Stoxx 600 index rose 0.63 per cent and MSCI’s gauge of stocks across the globe gained 1.17 per cent. Germany’s Dax jumped 0.85 per cent and the French Cac climbed 1.08 per cent.

Shares of Slack Technologies tumbled 14 per cent, wiping out nearly all their gains since the company’s listing in July, after the workplace messaging firm warned of slower revenue growth amid intensifying competition. The business-focused messaging and communications platform, which went public through a direct listing, managed to post a smaller-than-expected loss in its first report as a public company.

US stocks in general rose on Thursday on hopes of a de-escalation in trade tensions after Washington and Beijing agreed to hold high-level talks next month, while data showing strong job additions in the private sector allayed some slowdown concerns.

China’s commerce ministry said its trade team would lay the groundwork with their US counterparts in mid-September for the October talks. Technology stocks led gains and provided the biggest boost among the 11 major S&P sectors, rising 1.76 per cent. Those gains were driven by Apple, which rose 2.02 per cent, and chipmakers, with the Philadelphia Semiconductor index jumping 3.43 per cent. In deal news, insurer Prudential Financial agreed to acquire online insurance startup Assurance IQ for $2.35 billion. Shares of Prudential fell 1.4 per cent. Among losers were the defensive utilities, real estate and consumer staples sectors. – Additional reporting: Reuters