How to beat the FX market? Just get on Twitter, academics say 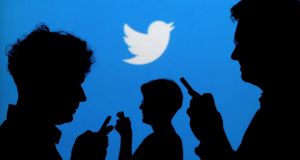 The musings of London-based foreign-exchange trader @trader_dante pop up on the feeds of 23,600 users, while the handle @50Pips, which tweets about its market calls and provides technical analysis daily, has almost 65,000 followers. (Photograph: Kacper Pempel/Reuters)

Traders need look no further than their Twitter feeds to gain an edge in currency markets, according to a new study by a pair of academics.

Buying and selling the euro based on predictions tweeted by currency watchers would give you risk-adjusted returns almost four times bigger than standard carry-trade strategies, Vahid Gholampour and Eric van Wincoop found in a paper published last month.

The odds of beating the market are best if you track Twitter users who have at least 500 followers, dubbed “informed agents” in the research because many of them work as brokers, analysts and financial commentators. The findings add to a growing body of literature suggesting market-moving information is circulated on social media before it’s fully reflected in asset prices.

“The level of performance definitely surprised me,” said van Wincoop, a former economist at the New York Federal Reserve, and Gholampour’s PhD supervisor for the three-year study at the University of Virginia. “It confirms the idea that Twitter is a good source of private information.”

While Twitter has 313 million active monthly users offering 140-character opinions on everything from election outcomes to sports results, currency predictions tend to be shared by people with skin in the game who care about their credibility, which may explain the wisdom of listening to what they have to say.

Many have cultivated captive audiences. The musings of London-based foreign-exchange trader @trader_dante pop up on the feeds of 23,600 users, while the handle @50Pips, which tweets about its market calls and provides technical analysis daily, has almost 65,000 followers.

Collecting data from October 2013 to March 2016, Gholampour and van Wincoop identified 27,557 tweets that contained a forecast on whether the euro would rise, fall or stay the same against the greenback. They then tested the accuracy of the guesses by devising a model to calculate the risk-adjusted returns available to investors if they’d followed the tweeters’ advice.

The academics found that making trades based on the sentiment of “informed agents” generated a Sharpe ratio -- a widely used measure of returns per unit of risk -- of 1.68. That compares with an annualized 0.44 for the long-term carry-trade strategy, which involves selling a currency with a low interest rate and using the funds to purchase a higher-yielding currency.

The bigger the Sharpe ratio the better because it indicates that after stripping out volatility, an investment strategy offers consistent returns over time. Even Twitter forecasters with fewer than 500 followers managed 0.77.

This isn’t the first study to suggest social media is emerging as a powerful tool for investors. In 2010, a group of professors at Indiana University found the general “mood states” of all Twitter users -- such as how “happy” or “calm” they are -- were closely correlated with whether the Dow Jones Industrial Average finished the day up or down.

Five years later, academics from IMT Institute for Advanced Studies in Italy published research suggesting that Twitter sentiment during busy periods, such as ahead of the flurry of quarterly earnings releases, provides at least some indication of whether an individual stock is likely to rise or fall.

While there seems to be wisdom in digital crowds, whether it can be harnessed to make money is more doubtful. A number of hedge funds have tried setting up funds that use social media to inform decisions, but two of the most notable, run by Derwent Capital Markets and MarketPsy Capital, folded after a few months due to lack of investment.

For his part, Gholampour, now an assistant professor at the University of Pennsylvania, is undeterred by the skepticism. After spending more than four years analysing tweets, he’s already planning his next Twitter data-mining target: the US. stock market.

Asked if he’d be open to putting put his research findings to practical use in the financial industry, Gholampour didn’t rule it out. More and more money managers are factoring social media into their allocations, after all.

“If somebody finds the work interesting I’m happy to have a conversation,” he said. “A crucial piece of information for any model of financial investment is the expectations of others, and Twitter provides that.”

1 Life as a Facebook moderator: ‘People are awful. This is what my job has taught me’
2 Suspicions rife as key Brexit trade talks begin in Brussels
3 Flight attendant seeks High Court injunction against Aer Lingus
4 Corona beer firm reeling after 8% slide due to coronavirus
5 ‘The only time apartments were viable was in . . . Ballsbridge, Killiney and Dalkey’
6 How well paid do you think you are? Here’s how to work it out
7 Irish companies restrict travel over coronavirus fears
8 How to turn racists’ genetic arguments against them
9 Pharma giant AbbVie warned Government against ‘unfair’ €572m tax bill
10 Coronavirus: Iseq down 11% in five days as global sell-off is worst week since 2008 crisis
Real news has value SUBSCRIBE