Europe inches higher despite drag from banks and carmakers 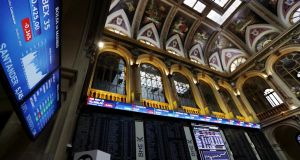 Madrid stock exchange: Spain’s Banco Popular extended its slide from the previous session, taking losses over the past two sessions to more than 11 per cent. Photograph: Sergio Barrenechea/EPA

Shares in Ryanair rose by almost 1 per cent to €14.69 as the carrier and Hungarian low-cost airline Wizz Air both reported a boost in passenger numbers last month. The number of people carried on Ryanair planes jumped 10 per cent 9.4 million.

CRH gained 0.5 per cent to €32.66 after US president Donald Trump said his planned infrastructure Bill may top $1 trillion (€938 billion).

Bucking the trend, Smurfit Kappa fell by 1 per cent to €24.45 as investors digested news that Italian competition authorities are investigating the company and a number of paper packaging peers for being involved in alleged price-fixing in continental Europe’s second-largest market for cardboard boxes.

Food companies were also out of sorts, with Kerry Group falling 0.7 per cent to €73.99, while Aryzta and Total Produce dropped at a similar pace to €29.70 and €1.95 respectively.

Precious metal miners Randgold Resources and Fresnillo were among the top gainers, up 1.6 per cent to 2.8 per cent, as gold prices hit a one-month high.

Distributor and outsourcer Bunzl rose 1.2 per cent after it said it bought two safety workwear businesses: ML Kishigo in the United States and Neri in Italy.

Supermarkets Morrison and Sainsbury’s fell 2.8 per cent and 2.2 per cent respectively after Kantar Worldpanel data showed their sales struggled in the first quarter while discount competitors Aldi and Lidl performed strongly.

South Africa exposed stocks Investec and Old Mutual rose 0.6 per cent and 0.1 per cent respectively, recovering from earlier losses due to credit ratings agency S&P’s downgrade of the African country to sub-investment grade.

GKN, which makes engines and components for cars, was down 2 per cent, tracking Europe-wide losses in the car market, fell 1 per cent.

Carmakers were the biggest sectoral losers, down 0.6 per cent, with Schaeffler, Peugeot and Volkswagen leading the industry lower. Figures for US sales of new vehicles in March at major carmakers came in below market expectations while investor worries over the outlook for diesel vehicles has cast a cloud over European carmakers’ stocks.

Banking stocks were also under the cosh, falling 0.4 per cent. Spain’s Banco Popular extended its slide from the previous session, taking losses over the past two sessions to more than 11 per cent after the lender announced a restatement on Monday and said that its chief executive is to step down.

Broker recommendations boosted individual names, with Rotork jumping 4.4 per cent after JP Morgan raised the valve-control systems maker to “overweight” – the equivalent of “buy” – from “neutral”.

Seadrill, the oil rig owner, slumped 38 per cent after warning that its shareholders and bond investors can expect steep losses as the firm reached an agreement to extend restructuring talks.

Stocks were little changed in mid-afternoon trading, as investors fretted over the ability of US president Donald Trump to deliver on his policy plans, and ahead of his potentially tense meeting with Chinese president Xi Jinping.

The market rally that was sparked by Mr Trump’s pro-business policy plans has cooled recently, following legislative setbacks that led investors to question whether the president would be able to deliver on his promises.

Adding to investor nervousness is Mr Trump’s upcoming meeting with Mr Xi, one which the US president expects “will be a very difficult one”, according to his tweet last week. He has held out the possibility of using trade as a lever to secure China’s co-operation against North Korea at the Thursday-Friday meeting.

1 Irish company paid €1.2m a year by collapsed Blumenthal-linked Australian restaurant
2 Why bosses should not be afraid of speaking out on Instagram
3 Should AIB compensate me for upsetting letter on arrears?
4 Hugo MacNeill steps back from Goldman Sachs role
5 Greencoat Renewables buys Clare wind farm for €35.4m
6 ‘I wouldn’t be a big saver. I tend to buy now and repent at leisure!’
7 Irish economy to grow by 3.4% this year, predicts EY
8 ‘Germans are very efficient and reliable. Cancelling is alien to them’
9 Hammerson appoints lead for move into housing
10 Legal eagles yet to land; economy to grow 3.4% this year; and CEOs on social media
Real news has value SUBSCRIBE