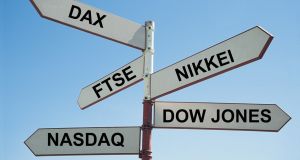 British banks were the biggest drag on the FTSE 100 index. Photograph: iStock

Britain’s top share index rose on Monday in choppy trade, beginning the second quarter on a positive note as gains among oil-related stocks and Burberry supported the FTSE 100 index.

The blue chip FTSE 100 index was up 0.1 per cent at 7,328.28 points by 9.54am. Luxury firm Burberry was the top riser, jumping 1.7 per cent after saying that it would transfer its beauty business to US group Coty in a deal that will bring in about $225 million (€211 million) plus ongoing royalty payments.

“It’s maybe one of those signature deals which could raise expectations of a new way of doing business, a new extra source of revenue beyond the traditional model,” Jasper Lawler, senior market analyst at London Capital Group, said.

A rally in oil stocks also lent support, with BP up 1.2 per cent and Royal Dutch Shell rising 0.5 per cent as the price of crude oil edged higher.

British banks were the biggest drag on the index, however, taking off about 4 points, with Barclays and Royal Bank of Scotland, down 1 per cent and 0.3 per cent respectively, in line with a broader decline among continental lenders.

ITV was the biggest individual faller, dropping 2.6 per cent and giving back a large part of the gains it made on Friday on the back of M&A speculation.

ITV’s shares pulled back on Monday after Liberum analysts said that it had spoken with the company and ITV had said the move was not Liberty increasing its stake in ITV.

Data showing that British manufacturing lost some of its momentum last month disappointed, as purchasing managers’ index (PMI) figures showed that manufacturing growth slowed in the first three months of this year.

Retailer Next was another sizeable faller, down 2 per cent after Exane BNP Paribas cut its rating on the stock to “underperform” from “neutral”.

Outside of the blue chips, Imagination Technologies plunged more than 60 per cent, on track for its biggest one-day loss on record after its biggest customer Apple said that it would stop using the British firm’s graphics technology in the iPhone and other products in up to two years’ time.

“It’s the worst nightmare for Imagination. Apple accounts for about half its revenues – you simply cannot easily replace a customer of that scale in a hurry, hence the gigantic sell-off in the stock,” Neil Wilson, senior market analyst at ETX Capital, said.