Honeymoon period over for Kerry chief as agm looms

Ulster Bank’s tech woes should come at a price 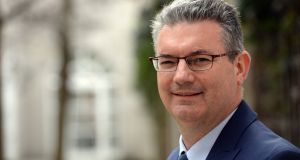 As chief executive honeymoon periods go, Edmond Scanlon’s first 12 weeks as chief executive of Kerry Group were pretty impressive, with the value of the third-largest company on the Iseq soaring 16 per cent to an all-time high of €16.6 billion just before Christmas.

But the market love-in has since faltered, with the stock down more than 8 per cent so far this year as Scanlon faces into his first annual general meeting (agm) at the Bandon Hotel in Tralee next Thursday.

Sentiment has been dented by general weakness across European food companies so far this year and Kerry’s bearish guidance in February about the impact of dollar and sterling weakness against the euro.

And while the group was able to pass a hefty 4 per cent increase in raw materials costs on to its own customers last year, and sees “flat to slightly deflationary” pricing this year, rival fragrance and flavour maker Givaudan in Switzerland noted earlier this month that costs are on the rise again for the sector.

Kerry Group is best known in Ireland for its consumer foods business, that includes brands such as Dairygold spread, Galtee sausages and kids’ lunchbox favourite Cheesestrings, but it is the group’s world-leading and higher-margin taste and nutrition division that accounts for 80 per cent of sales. The legacy business is set to become even smaller over the coming years as five-year targets set out by Scanlon less than two weeks into the top job last October targeted up to 3 per cent consumer foods business volume growth a year over the medium term – half the rate set for taste and nutrition.

Analysts at Wall Street investment giant Goldman Sachs estimated recently that Kerry has the flexibility to spend €2.3 billion in investments and acquisitions to boost earnings over the next few years. Although the fast-growing Asia-Pacific region, which Scanlon headed before taking up the top job last year, has been a focus in recent times, Kerry also has its sights on stepping up investment in Latin America, the Middle East and Africa.

The Kerry way when it comes to mergers and acquisitions has always been to concentrate on small bolt-on deals rather than large, transformational transactions. This is unlikely to change under Scanlon, who signed off on three deals costing €80 million in the first two months of the year, following the group’s expenditure of €400 million across eight purchases in 2017.

But the real value in Kerry has always been the way it can deliver industry-topping solid organic growth. This is helped by the group’s 800-strong team of in-house scientists around the world and about €260 million of annual spending on research and development, which, again, is the largest commitment among its peer group.

This spend allows Kerry to keep on top of emerging trends in the global food industry, such as the “clean label” movement that shuns artificial ingredients and chemicals, which started off in the US and is expanding globally. Analysts reckon that the food and beverage products Kerry is developing that feed into the health and wellness theme will continue to outperform the wider market and command premium pricing for the foreseeable future.

While some overseas analysts and investors have long questioned why Kerry continues to hold on to its consumer foods division, whose trading margins are running at almost half the 15 per cent rate of that in taste and nutrition, they are not the types that will be turning up at the agm next week in Kerry.

Individual farmer shareholders and Kerry Co-operative Creameries, which continues to hold 13.7 per cent of the stock, know only too well that the 44-year-old dairy farmer’s son from Brosna in Co Kerry, who came through the group’s graduate programme two decades ago, is not going to sell off that cash-generation machine.

Ulster Bank, which was fined €3.5 million by the Central Bank in 2014 for IT failures that hit 600,000 customers two years’ earlier, was quick to rush out and blame “human error” when it emerged last week that money, including monthly salaries, had temporarily disappeared from customers’ accounts over the weekend.

After all, its parent, Royal Bank of Scotland, has committed billions of pounds towards upgrading its IT systems following the unprecedented meltdowns across group in the summer of 2012.

Ulster said on Tuesday that this week’s fiasco was the result of a “payment file” not being processed the previous night, which meant that some transactions applied to customers over the previous four days were temporarily not showing. But even if the bank’s technology systems were up to scratch, what about the industry standard of having “four eyes” checking major transactions or updates?

The bank has returned €3 billion by way of special dividends to RBS in the past 18 months, after receiving a £15 billion (€17.1 billion) parental bailout during the crisis.

Deducting the most recent dividend, paid in January, from Ulster Bank’s end-2017 capital base suggests the bank is sitting on a further €1.5 billion or so of excess equity.

Shouldn’t regulators in Dublin and Frankfurt consider banning any further dividend transfers to Edinburgh until they are satisfied that Ulster’s systems and processes are finally up to scratch?