Global markets rise on hopes for easing of trade wars 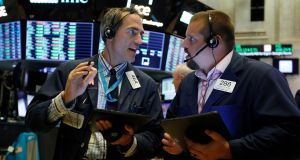 Traders work on the floor of the New York Stock Exchange on August 19th. Technology stocks were leading indexes higher on Wall Street after the US gave Chinese telecom giant Huawei another 90 days to buy equipment from American suppliers. Photograph: AP Photo/Richard Drew

European shares ended higher for a second straight session on Monday on signs that measures would be adopted to prop up growth in major economies, while bond yields rebounded amid improved global sentiment plagued by recession worries. US stocks also surged, building on the previous session’s rally.

The Iseq was up 0.7 per cent, but still lagged the gains on many of its European peer indexes.

Swiss-Irish bread maker Aryzta led the way, up more than 9 per cent to 68 cent per share. It rebounded in trading on Monday to reclaim some of the ground it lost last week, when its shares plunged following negative brokers’ reports on its turnaround plan.

Ryanair rose 3.6 per cent to €8.87 as it pursued court actions in Ireland and the UK to try to stop pilots from striking.

Companies operating in the Irish housing sector struggled, however, after weekend reports that the Government would cap the help-to-buy scheme. Glenveagh was down 3.2 per cent to 64 cents, while Cairn Homes fell 4.4 per cent to 98 cents.

Greene King stole the headlines as it soared higher after announcing a deal had been agreed to sell the firm to Hong Kong business CKA Group. The UK pub group and brewer agreed the deal to sell its entire business to the real estate group run by Hong Kong’s richest family. The Suffolk-based business is the UK’s biggest pub owner, with roughly 2,700 pubs, restaurants and hotels across the country. Shares in Greene King closed 287p higher at 850p.

Elsewhere, online grocer and delivery firm Ocado led the FTSE 100 as its stock was given a lift by analysts at JP Morgan, who raised their target price for the business. Shares in Ocado were up 53p to 1,204p at the end of trading.

Sainsbury’s saw its shares rise after the supermarket giant shrugged off reports that it is seeking to replace under-pressure boss Mike Coupe. The grocer rebuffed claims that it has earmarked possible internal candidates to replace the chief executive. Sainsbury’s saw shares close up 5.8p at 188.35p.

The pan-European STOXX 600 index, hammered since the start of August by worries of a possible global slowdown, ended 1.2 per cent higher, with Frankfurt shares up 1.3 per cent, recovering from last week’s six-month low.

Friday’s report that Germany’s coalition government may ditch its balanced budget rule to take on new debt and launch stimulus continued to help sentiment. The French Cacalso rose by 1.34 per cent.

All Europe’s stock market sectors ended the session in the black. Oil stocks chalked up their biggest daily gain since January this year, benefiting from a rise in crude prices due to an attack on Saudi oil installations in Yemen.

Among individual stocks, Norwegian Air rose 4 per cent after agreeing to sell its stake in Norwegian Finans Holding for 2.22 billion crowns (€221 million) in an attempt to boost the loss-making airline’s finances.

Heading into afternoon trading, all of the 11 major S&P sectors were higher with a 1.88 per cent rise in energy sector leading the gainers.

Shares of Apple provided the biggest boost to the three main Wall Street indexes. US president Donald Trump said on Sunday that he had spoken with Apple chief executive Tim Cook, who “made a good case” that tariffs could hurt Apple.

Adding to the optimism around trade, Washington extended a reprieve given to Huawei Technologies that permits the Chinese firm to buy supplies from US companies so that it can service existing customers. Trade-sensitive chipmakers gained with the Philadelphia chip index up 2.06 per cent.

Defensive real estate and utilities posted the smallest gains. Estee Lauder jumped 10.1 per cent as it forecast full-year revenue and profit above estimates, bolstered by booming demand for its premium skincare products and strength in its Asia-Pacific business.

1 State may face €1bn in compensation in Covid-19 case, Press Up claims
2 Karlin Lillington: How I managed to cut my mobile phone bill by at least a half
3 Fiona Reddan: Who’s afraid of Revolut? Not AIB and BOI it seems
4 Lahinch Golf Club runs out of its own cash after €3m Covid-19 hit
5 ECB ‘should wipe Covid crisis debt’ to help nations recover
6 Salesforce in talks to buy Slack in huge cloud software deal
7 Is Coveney the right man to lead Greencore out of Covid-19 crisis?
8 Ireland must beware as digital tax reform enters critical phase
9 Smarter ways to heat your home: Eight of the best modern systems
10 Workhuman predicts double-digit revenue growth for 2020
Real news has value SUBSCRIBE