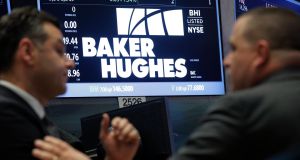 Traders on the floor of the New York Stock Exchange. Wall Street was sharply lower in afternoon trading on Tuesday, with all 10 major S&P sectors in the red, after weak economic data out of China and Europe rekindled fears of a slowing global economy.

European shares fell to three-week lows on Tuesday, with Commerzbank leading decliners after a slump in profits and miners tracking lower metals prices.

The pan-European FTSEurofirst 300 index was down 1.6 per cent after earlier falling to 1,316.85, its lowest intra-day level since April 13th. The STOXX Europe banking index fell 3.9 per cent, while the Basic Resources index was down 6.6 per cent.

The Iseq followed other European bourses into negative territory, finishing the day down nearly 2 per cent or 119.25 points to 6,042.16.

A decline in profits for Commerzbank dragged down banking stocks across Europe with Bank of Ireland losing 5 per cent to close at 25 cents.

Weakness in the European aviation sector after Lufthansa updated markets hit Ryanair, which ended the day down 2.5 per cent to €12.84.

Construction stocks were also down across the continent, hurting both CRH and Kingspan. CRH lost 2.5 per cent to finish at €24.75 while Kingspan was down 0.50 per cent at €22.90.

Defensive stocks such as food and beverages were where most of the money went. Fyffes was down marginally to flat at €1.56 while C&C rose 0.50 per cent to €3.95.

Britain’s top shares index fell on Tuesday, weighed down by weakness in the mining sector after poor data, with financial stocks also hit by a fall in HSBC following results.

Metals prices and hit mining stocks were badly hit with Anglo American falling 12.8 per cent while Rio Tinto and Glencore declined 6 and 8 per cent respectively. In all, materials and energy shares trimmed 36 points off the index.

Financials knocked 22.4 points off the index, with HSBC ending up as the biggest weight in the sector. It turned lower after gains at the open and was down 1.6 per cent. The bank promised higher dividends on Tuesday after a 14 per cent profit drop fuelled doubts among some investors about the bank’s ability to continue growing payouts.

European financials fell more than 3 per cent, hit by a string of weak first quarter earnings reports from banks and the euro’s burst to an eight-month high above $1.16. European bank stocks are down more than 20 per cent so far this year.

Wall Street was sharply lower in afternoon trading on Tuesday, with all 10 major S&P sectors in the red, after weak economic data out of China and Europe rekindled fears of a slowing global economy.

Pfizer was up 3.2 per cent at $33.85 after the company reported a rise in quarterly revenue. Perfume maker Coty fell 4.5 per cent to $29.66 after reporting its first profit miss in seven quarters.