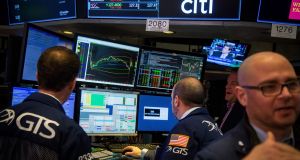 Traders on the floor of the NYSE on Monday, November 20th. Photograph: Michael Nagle/Bloomberg

European markets shrugged off the failure of politicians to form a coalition to run Germany, the region’s biggest economy, and gained ground on Monday.

Index heavyweight, building materials giant, CRH, helped drive the Irish market’s advance, climbing 2.1 per cent to €30.93. Traders pointed out that the stock had a “fairly chequered” few days last week, and was regaining some of the ground that it lost.

Insulation specialist Kingspan, advanced 2.3 per cent to €33.97 following what dealers called a good move for the stock.

The UK lagged European markets which made a robust recovery, shrugging off the breakdown of coalition talks in Germany. Strength in sterling put pressure on the index’s dollar-earnings constituents.

Shire’s stock was down in a reaction to some positive drug trial results for Swiss peer Roche, whose shares jumped almost 6 per cent, on positive news from experimental drug tests. Shares in another pharmaceutical player, AstraZeneca also edged 0.2 per cent lower.

Oil majors BP and Royal Dutch Shell edged up 0.1 to 0.4 per cent, while miners Anglo American and Glencore also pulled out of an early dip, gaining 1.4 to 1.5 per cent as copper prices edged higher.

Health stocks were also strong movers on the mid-cap index. Hikma shares jumped 5.9 per cent, while Spire Healthcare sank 9.5 per cent after South African private hospital group Mediclinic said it would not make another offer for the company. Shares in Mediclinic fell 2.4 per cent on the FTSE 100.

TalkTalk shares sank 4.5 per cent after Citi lowered its price target on the stock, saying the company may need to further cut its dividend in order to stay within debt covenants.

Shares in travel business Thomas Cook, however, climbed 5.2 per cent as HSBC started coverage of the stock with a buy rating and Panmure Gordon raised to hold from sell.

The pan-European Stoxx 600 rose 0.3 per cent while Germany’s benchmark Dax was up 0.2 per cent despite Chancellor Angela Merkel’s failure to form a three-way coalition government.

Shares in Swiss drug maker Roche rose after it announced that tests with immunotherapy treatment, Tecentriq, had made advances against lung cancer.

Data suggested that its haemophilia agent Hemlibra could be used by more patients, putting it in a position to shake up the $10 billion market for treating the blood disorder.

The news boosted its shares by 5.87 per cent to 243.60 Swiss francs. Analysts said that the company had delivered a best case scenario in the face of scepticism about these tests.

Meanwhile, Ms Merkel’s failure to form a coalition including Germany’s Green party aided energy group, RWE, as the market speculated that this could delay the phasing out of coal-fired electricity generators and slow the advance of wind and solar power. The group’s shares rose 2.75 per cent to €19.98.

The technology index got a boost from a 1.13 per cent gain in semiconductor stocks on the back of merger news. Cavium jumped 10 per cent after larger rival Marvell said it would buy the company for about $6 billion. Marvell shares were up 5.3 per cent.

Health stocks were weighed down by a 2.3 per cent drop in Merck and 1.4 per cent fall in Bristol-Myers after Roche announced positive trial results for a competing cancer drug.

Wal-Mart fell 1.2 per cent after Goldman Sachs cut its rating on the stock to “neutral” from “buy”.