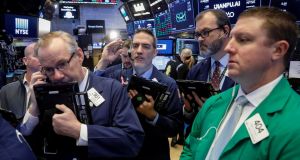 Traders work on the floor of the New York Stock Exchange on Thursday. On the day, the S&P 500 index recovered from its worst two-day fall since August. Photograph: Brendan McDermid/Reuters

European shares enjoyed a recovery on Thursday, snapping their longest losing streak since October 2016 as the cyclical sectors which had driven a market-wide sell-off made a comeback, though oil was a weak spot.

The pan-European Stoxx 600 index climbed 0.8 per cent, with the cyclicals-heavy Dax up 0.6 per cent. Financial services, autos and technology sectors were among the best-performing, driving the market higher.

“European equities suffered recently from the stronger euro and some early profit-taking before the end of the year,” said Valentin Bissat, European equity strategist at Mirabaud Asset Management.

“After the recent underperformance, we should see cyclicals outperform again in the next few weeks with long-term interest rates rising and a steeper yield curve,” he added.

The Iseq jumped 115 points or 1.7 per cent to 6,839 in tandem with other European bourses amid a bounce in global stocks. After several difficult sessions on foot of the growing tracker mortgage scandal here and a general weakness in European financials, Bank of Ireland was up 2.3 per cent at €6.35 and AIB was up 1.2 per cent at €5.09. PaddyPower Betfair also snapped a difficult few weeks predicated on controversy over gaming machines in betting shops to close 4.5 per cent up at €98.65.

Iseq heavyweight CRH was buoyed by positive market sentiment in the sector, rising nearly 2 per cent to €29.92. Dublin listed property investment fund Hibernia Reit traded broadly flat on the day despite posting a 118 per cent jump in half-year profits. Ryanair, meanwhile, was up 2.6 per cent at €17.35

The UK’s top share index shrugged off weakness from oil stocks on Thursday as a handful of earnings updates were in focus, though GKN plunged on uncertainty following the ditching of its CEO designate. The FTSE was up 0.2 per cent at 7,386.94 points at its close, with gains in the healthcare and consumer sectors offsetting weaker commodity stocks.

Midcaps were up 0.8 per cent. Oil stocks were among the top fallers on the FTSE, hit after Reuters reported that Norway’s trillion-dollar wealth fund proposed to drop oil and gas companies from its benchmark index. This would mean the fund cutting its investment in those companies. Shares in Royal Dutch Shell and BP, in which the fund holds a stake, fell 2.9 per cent and 0.8 per cent respectively. Some investors, however, were not immediately concerned. “Nothing is imminent and even if the advice is fully implemented we believe this will have limited impact on the oil and gas producers, as the holdings of Norges Bank are relatively small and no doubt will be disposed of over an extended time frame, Liz Dhillon, equity analyst at Quilter Cheviot, said in a note.

Norges Bank Investment Management manages Norway’s sovereign wealth fund. Elsewhere, GKN’s shares dropped after the firm said that CEO-designate Kevin Cummings was leaving. This followed a second large writedown at the aerospace division Cummings used to run. The shares ended 4.8 per cent lower, after falling as much as 12 per cent to their lowest level in 16 months.

French telecoms firm Bouygues led gains on European markets, up 5.2 per cent after raising its profitability goal for the year, buoyed by a robust 37 per cent jump in nine-month operating profits.

Facilities and catering firm Sodexo however fell 4 per cent as traders and analysts expressed disappointment over its margin guidance and annual revenues coming in slightly below consensus forecasts.

Swedish appliances maker Electrolux fell 2.9 per cent despite saying it expected home appliances markets to grow in 2018. The results were overshadowed by industry data showing home appliance shipments in the United States, a major market for Electrolux, fell 1.3 per cent year-on-year in October. Italian banks Banco BPM and BPER Banca were among the top fallers after Banca Carige failed to clinch a cash call, reigniting fears around bad loans in the sector.

The S&P 500 index recovered from its worst two-day fall since August on Thursday after Wal-Mart and Cisco shares soared on strong results. Wal-Mart surged 8.74 per cent to hit a record high of $97.90 after reporting quarterly sales that beat expectations on hurricane-related purchases and soaring online sales.

Cisco shares surged 6.44 per cent as strength in security business helped its earnings. Both the stocks boosted the S&P and the Dow. “The bull market is still intact. Good earnings and strong economic data are what stocks care about,” said Michael Antonelli, managing director, institutional sales trading at Robert W Baird in Milwaukee.

Folgers coffee maker J M Smucker rose about 8.04 per cent as its sales and profit topped analysts’ forecasts. Utilities and energy sectors were the only laggards. Viacom shares sank 5.6 per cent after the MTV owner said it expected high single-digit declines in revenue from US cable TV operators and online distributors in the first half of 2018.

1 State’s biggest landlord records 30% rise in rental income
2 Irish tourism must also help itself to survive the pandemic
3 Trump signs executive orders banning TikTok and WeChat
4 What will the office market look like after the great remote working experiment?
5 Project Eagle: What was it and why is it in the news?
6 ‘Saudi Arabia is where the opportunities will happen in future’
7 More than 1,200 tracker mortgage complaints still awaiting ombudsman ruling
8 How your country’s history affects the way you think
9 Two men face fraud charges over £1.2bn sale of Nama’s NI loans
10 Marlet secures €65m from AIB for Dublin docklands build-to-rent scheme
Real news has value SUBSCRIBE