Market report: Fall in commodity stocks but Airbus rallies on back of record deal 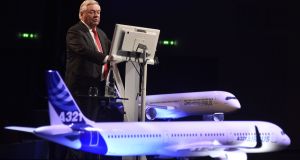 A fall in commodity stocks and sustained profit-taking sent European shares to an eight-week low and their seventh straight session of losses on Wednesday, but Airbus rallied after winning a record aircraft deal.

Crude oil’s price slide on worries over the outlook for demand and weaker metal prices weighed on mining and energy stocks like Tullow Oil in Dublin and Rio Tinto and Royal Dutch Shell in the UK.

Their falls helped send the pan-European STOXX 600 index down to its lowest level since late September. It closed 0.4 per cent down, slightly off its earlier lows.

Dublin- and London-listed Tullow Oil, which is not a member of the Iseq, slid by 7.1 per cent to €1.95, as Brent prices fell as much as 1.8 per cent to $61.30 a barrel after the International Energy Agency moved on Tuesday to lower its outlook for oil demand growth for both 2017 and 2018, partly because of warmer-than-expected winter weather.

Bank of Ireland was also out of sorts, falling 2.6 per cent to €6.20, as investors continued to digest the bank’s announcement last week that it will have to set aside up to an additional €175 million to cover refunds, compensation and other costs relating to the industry-wide tracker mortgage scandal.

Bucking the trend, Kingspan edged 0.5 per cent higher to €32.99 to recover some of the ground lost earlier this week as a result of its badly-received comments on UK demand, as industry peer Rockwool report what analysts at Goodbody Stockbrokers called a “solid” set of third-quarter figures.

The FTSE 350 Mining index fell one per cent to the lowest level in more than a month.

Some telecoms performed strongly, with BT gaining 1.4 per cent and Vodafone building on the previous session’s gains after it lifted its full-year earnings forecast for the first time in recent history. Vodafone shares added 0.6 per cent.

Germany’s export-oriented DAX index fell 0.6 per cent, weighed down by a stronger euro.

Cars were also among the biggest losers, down 0.9 per cent, but falls were spread across sectors as investors continued to take profits following this year’s rally.

On the positive side, Airbus rose 2.4 per cent, providing the biggest boost to overall index gains, after the aircraft maker received an historic order for 430 A320 jets in a deal up to $50 billion (€42.2 billion), marking a dramatic turnaround for Airbus, which had been lagging behind Boeing in the contest for orders.

The Dow Jones Industrial Average fell 0.3 per cent, to 23,329.13, with the S&P 500 and the Nasdaq Composite dropped declining by similar rates.

“The market often goes through a bit of a what’s next in terms of a catalyst. Some of it’s just a natural pullback from what has been an extraordinary year,” said Dave Donabedian, chief investment officer of CIBC Atlantic Trust Private Wealth Management.