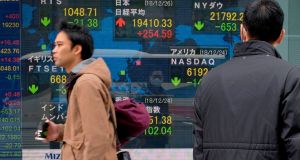 The flash currency moves came after Apple warned that economic weakness in China and lacklustre iPhone upgrades would weigh on its quarterly revenue. Photograph: Getty

Mounting concerns over the health of the global economy caused dramatic swings in Asian currencies on Thursday, with the Japanese currency surging by as much as 3.7 per cent against the dollar in thin holiday trade.

In contrast, the Australian dollar, viewed as a proxy for the Chinese economy, slumped to its lowest level in a decade, falling as much as 3.5 per cent to $0.6741 against the greenback.

“For the Aussie dollar it was a flash crash this morning; for the yen, it’s been the opposite,” said Robert Carnell, chief economist and head of Asia-Pacific research at ING.

The volatility was sparked by a warning from Apple that economic weakness in China and lacklustre iPhone upgrades would weigh on its quarterly revenue for the end of 2018. The announcement wiped more than 7 per cent from the company’s shares in after-market trading on Wednesday and knocked those of Apple suppliers in Asia and Europe.

While analysts pointed to other problems with the iPhone in addition to China as a cause for its weakening sales, Apple’s warning underscores concerns that the world’s second-largest economy is decelerating, rattling investors and exacerbating fears of a broader global economic slowdown.

China’s private manufacturing sector contracted for the first time in 19 months in December, according to data published on Wednesday, in the latest sign that the economy is coming under pressure from weakening domestic demand and tariffs from the US.

“I think the yen’s rise against the dollar was due to continuing global risk aversion pushing up the Japanese currency’s haven appeal, triggering more algorithmic yen buy orders which escalated the move,” said Koon Chow, macroeconomic and foreign exchange strategist at UBP.

The yen surrendered some of its gains to trade at ¥107.39, still 1.37 per cent stronger against the greenback, while the Aussie dollar pared losses and was trading at 0.6957 against the US dollar in afternoon trading.

“The part reversal of the move is symptomatic of this type of programmatic trade,” said Mr Chow.

Cliff Tan, East Asian head of global markets research at MUFG, said that the new year has “started with a number of major indicators seemingly showing economic weakness around the world”, adding that there are “fears of a global recession” over the next couple of years.

“But the currency moves of the past 12 hours are largely tied to Apple [triggering] a lot of fears lurking in a lot of asset classes,” Mr Tan said, adding that retail investors in Japan might have cut their long US dollar-short yen positions, which would have exacerbated the sharp move in the yen.

“The market’s going to be very sensitive to disappointing data so we are expecting more volatility,” he said, referring to Asian equities.

“If the US is going through volatility because of fears of weaker growth and recession, then it’s hard for Asia to shake that off.”

In South Korea, SK Hynix, a supplier of memory chips, slipped as much as 4.3 per cent, and Samsung Electronics was down 1.9 per cent. The Kospi index was down 0.4 per cent. While in Europe, Zurich-listed AMS dropped as much as 12 per cent to SFr20.72, and Dialog Semiconductor dropped 5.8 per cent to €20.33. – Copyright The Financial Times Limited 2019