Subdued trading in Dublin with Kingspan, Total Produce and Dalata among gainers 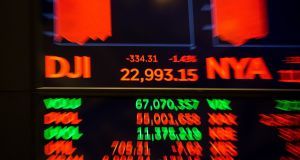 US stocks looked to pare declines after a shaky start. Photograph: Bloomberg

European shares lost further ground in their first trading day of 2019 on Wednesday as fears about global growth, trade wars and political instability rolled over into the new year while investors sought safety in stocks considered less risky.

While sentiment had already been hit by disappointing data from China, fresh surveys showed Euro zone manufacturing activity barely expanded at the end of 2018 in a broad-based slowdown.

It was a quiet start to trading in Dublin on Wednesday with analysts reporting low volumes across the board. With little in the way of corporate news expected this week, brokers suggested the Dublin market will likely stay subdued.

Total Produce led the gainers, up 3 per cent to €1.46 while building materials group Kingspan ended 2 per cent higher at €38.18.

Hotels group Dalata also rose, ending up 2.85 per cent to €4.87. Other risers included Cairn Homes, up 2 per cent, Hibernia Reit, up 1 per cent, and Paddy Power Betfair, which closed 1.5 per cent higher.

London shares clawed back losses to end the day on a positive note after a disastrous 2018, helped by investor appetite for stocks deemed less risky and also by a comeback for oil majors despite weak data from China. London’s blue-chip bourse ended 0.1 per cent higher while the mid-cap index was up 0.5 per cent after steep losses earlier on Wednesday.

Heavyweights BP and Shell advanced 2.3 per cent and 1.4 per cent, respectively, as crude prices erased earlier losses to trade in the black.

High street retailer Next was up 4.7 per cent, top of the blue-chips, ahead of its Christmas trading update due on Thursday.

Euro zone stocks ended down just 0.3 percent and the pan European Stoxx 600 closed 0.2 percent lower after trimming earlier heavy losses. Paris notched up the biggest drop, down 1 per cent, while Frankfurt, Madrid and Milan all managed to move back into positive territory by the close.

German medical equipment maker Gerresheimer dropped 5.8 percent to its lowest since July 2015 after JP Morgan cut its rating on the stock to “underweight”, according to traders.

In Italy, market watchdog Consob suspended trading in shares of Banca Carige while the European Central Bank appointed temporary administrators in a bid to save the struggling lender after it failed to raise capital late last year. The Italian banking sector was down 1.1 per cent.

Wall Street was little changed early on Wednesday, clawing back from losses of more than 1 per cent earlier, as gains in energy and bank stocks helped offset worries about a global economic slowdown.

Among individual stocks, Tesla dropped as much as 9 per cent on Wednesday after the electric car maker cut US prices for all its vehicles to offset lower green tax credits and fell short on deliveries of its mass-market Model 3 sedans in the fourth quarter.

Tesla turned a profit for the third quarter but is unprofitable for the first nine months of 2018, and cash flow remains a concern for investors. – Additional reporting: Reuters

1 Fianna Fáil may have just pressed the pause button on the property market
2 Who are Ireland’s 17 billionaires?
3 Saudi prince’s WhatsApp account ‘directly involved’ in Bezos hack
4 European investor acquires Harcourt Road offices for €55m
5 Corporate tax change is inevitable, says Donohoe
6 New blow for Ted Baker as accounting scandal doubles in size
7 My father in a nursing home wants to gift me his house
8 Are there annual limits on inheritances or gifts to a child?
9 Irish organisations struggle to comply fully with GDPR
10 O’Flynn company ‘mistakenly’ got go-ahead for Birmingham project
Real news has value SUBSCRIBE