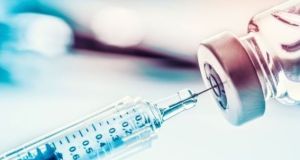 Shares of British drugmaker AstraZeneca dropped 0.6 per cent as questions were raised about the results of its late-stage vaccine study

European shares edged lower on Friday as investors exercised caution ahead of a barrage of economic data due later in the day, while doubts about the effectiveness of AstraZeneca’s Covid-19 vaccine also hit sentiment.

The pan-European STOXX 600 dipped 0.1 per cent, with travel and energy sectors among the biggest decliners in early trading. The benchmark index was, however, on course for a fourth consecutive weekly gain.

Shares of British drugmaker AstraZeneca dropped 0.6 per cent as questions were raised about the results of its late-stage vaccine study, potentially hindering chances of the shot getting speedy US and EU regulatory approvals.

AstraZeneca’s chief executive said the company is likely to run an additional global trial to assess the efficacy of the vaccine using a lower dose.

Germany’s blue-chip DAX was flat, as Covid-19 infections in the country surpassed the one million mark and the daily death toll hit a record.

Investors will focus on a survey by the European Commission on euro zone business climate, consumer confidence and economic sentiment data for all sectors due later in the day.