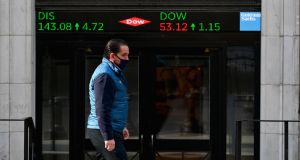 European shares closed lower on Monday as investors weighed signs of progress in developing a Covid-19 vaccine against the threat of economic damage from sweeping business restrictions to contain a surge in infections.

Boosting global equity markets earlier on Monday, AstraZeneca said its Covid-19 vaccine, developed along with the University of Oxford, could be around 90 per cent effective. However, AstraZeneca’s shares fell 3.8 per cent as traders took into account its lower efficacy rate compared with rivals such as Pfizer, which has so far reported the highest efficacy rate of 95 per cent, followed by Moderna’s 94.5 per cent.

The pan-European Stoxx 600 index ended down 0.2 per cent after having gained as much as 0.6 per cent in morning trading.

“There is a significant chance of continuing lockdown measures as the second wave isn’t under control yet,” said Bert Colijn, senior economist for the euro zone at ING. “That means that some form of lockdown in December will continue to depress economic output before things actually start getting better.”

The Iseq was down 0.6 per cent at 7,081, in keeping with the marginally weaker performance of other European bourses.

Aryzta was up another 3 per cent to 62 cent on the back of news that private equity firm Elliott Capital Advisors made a proposal to its board of directors to acquire all outstanding shares of the Swiss-Irish frozen baked goods-maker for an indicative price of 0.80 Swiss francs (€0.74) per share.

The London markets closed lower as an update from AstraZeneca on its potential vaccine with the University of Oxford failed to spark life into cautious traders. Prime minister Boris Johnson’s update on new restrictions in England from December 3rd weighed on sentiment alongside the impact of a strong pound.

Despite tighter tiered restrictions, pub companies saw their shares push higher as many venues prepare to reopen in some capacity next month.

AstraZeneca shares were, however, lower, falling 317p to 8,000p as some analysts raised concerns that the vaccine may not get the green light in the US.

Elsewhere in company news, Cineworld shares soared after the troubled chain secured more than £550 million in extra liquidity to bolster its finances. The company, which has temporarily shut its US and UK theatres, said it had secured a £336 million debt lifeline, as well as another £233 million through extending credit facilities and a tax refund which has been brought forward. Shares in Cineworld rose by 9.21p to 55.3p at the close of play.

Breakdown group the AA slipped in value after it confirmed it had received a £218 million offer for the business.

The pan-European Stoxx 600 index index has gained nearly 40 per cent from its March lows, helped by a flood of stimulus measures, but gains remain capped as data points to a faltering economic recovery from a pandemic-induced recession.

Manufacturing activity, however, remained a bright spot as many factories remained open during lockdowns.

Germany’s HelloFresh fell 3.3 per cent after the company said it bought Factor75, a US provider of fully prepared meals, for up to $277 million.

The blue-chip Dow rose in choppy trading on Monday as hopes of a Covid-19 vaccine fuelled demand for economically-sensitive stocks such as energy and industrials, while a sell-off in technology heavyweights weighed on the S&P 500 and the Nasdaq.

Six of the 11 major S&P indexes were trading higher by early afternoon, with industrials and energy jumping 1.2 per cent and 4.6 per cent respectively as data showed monthly business activity expanded at the fastest rate in more than five years.

Sentiment was dented by new lockdowns to contain a surge in coronavirus infections, with Nevada on Sunday becoming the latest state to tighten curbs on casinos, restaurants and bars, while imposing a broader mandate for face-coverings over the next three weeks.

Tesla surged 5.7 per cent, inching closer to hitting $500 billion in market capitalisation ahead of its inclusion in the S&P 500 next month. – Additional reporting by Reuters