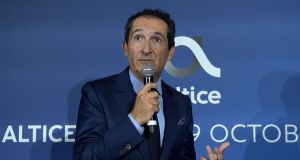 Patrick Drahi, who owns 77.6 percent of Altice Europe, wants to buy the remaining capital of the telecom and media group and delist it from the Amsterdam Stock Exchange. Photograph: Eric Piermont/AFP

French billionaire Patrick Drahi has offered €2.5 billion to minority shareholders in Altice Europe to take full control of the group, in the latest example of buyers taking advantage of the low valuations of listed European telecoms companies.

Mr Drahi already owns 77.6 per cent of the Amsterdam-listed group’s shares. Altice Europe said delisting would enable it to focus on its long-term strategic goals and less on short-term performance driven by quarterly reporting.

Over the past year some investors have taken European telecoms companies private or consolidated control as share prices across the sector have drifted lower. Xavier Niel, the French billionaire, financed a €1.4 billion buyback of shares in Iliad last November to increase his stake, while Spanish company MasMovil agreed to a €5 billion private equity takeover in June.

Next Private, a subsidiary of Mr Drahi’s Luxembourg-based holding vehicle, has offered €4.11 a share in cash – a 24 per cent premium to the closing price of Altice Europe’s shares on Thursday – which has been recommended by the board. Mr Drahi will fund the buyout through a term loan credit agreement with BNP Paribas.

Altice’s shares rose 25 per cent to €4.14 in early trading on Friday following the offer. The stock was trading at more than €6.50 in February, before the Covid-19 lockdown.

“In the last month the [Altice] shares have been down 17 per cent. The offer price of €4.11 is only where the stock was 15 trading sessions ago – hence it appears more like an opportunistic bid to us,” said Nayab Amjad, an analyst at Citigroup.

Andrey Kuznetsov, senior portfolio manager at Federated Hermes, said that Altice’s bonds were trading slightly lower following the news, reflecting uncertainty over the structure of the deal and whether leverage at the already debt-laden company would rise further. He added that Mr Drahi “has a history of changing ownership structures and financing structures, anything is possible”.

Altice Europe was floated in 2014 to fund Mr Drahi’s acquisition spree, as he built a European telecoms empire with the takeover of SFR in France for €17 billion later that year and Portugal Telecom in 2015 for €7.4 billion.

The group then entered the US market with two cable acquisitions but its large debt pile and deteriorating performance in France sent the shares into freefall in 2017.

It later split its US business into a separate vehicle, Altice USA, which will remain listed. The group also restructured its European operations, selling off towers and fibre assets to reduce net debt which stood at €29 billion at the end of June.

Robert Grindle, an analyst with Deutsche Bank, said that the turnaround of Altice Europe was not reflected in its valuation which had opened the door for Mr Drahi to turn his back on the public markets.

“Who can blame him as life will be more simple to execute the company’s strategy under private ownership and when further asset sales are likely to command a much higher premium than reflected in the Altice share price today,” he said. Deutsche Bank values Altice Europe at €9 a share.

Mr Drahi described the move to delist the shares after six volatile years as a public company as an “exciting chapter” in its history.

“The proposed ownership structure will enable an increased focus on executing our long-term strategy, and underlines my confidence and conviction in Altice Europe’s prospects,” he said.