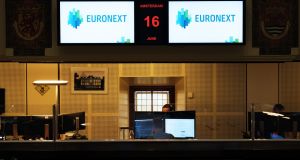 European shares closed at a near one-week low on Monday. Photograph: Yuriko Nakao/Bloomberg

European shares closed at a near one-week low on Monday as signs of a resurgence in coronavirus cases in Germany and elsewhere unnerved investors hoping for a swift economic recovery.

After switching between gains and losses earlier in the session, the pan-European Stoxx 600 index ended 0.8 per cent lower, led by losses in the food and beverage, telecom, oil and gas sectors. Scandal-hit German payments company Wirecard shed another 44 per cent as it said a quarter of its assets totalling €1.9 billion that auditor EY had been unable to account for probably did not exist. Its stock has shed more than 70 per cent of its value over the past week.

The World Health Organisation (WHO) reported a record increase in global coronavirus cases on Sunday, while Germany’s Covid-19 reproduction rate jumped to 2.88, a rate showing infections are rising above the level needed to contain the disease over the longer term.

“There remains a degree of concern that a rise in infection rates . . . could well derail the prospects for a recovery as economies continue to try and reopen,” said chief market analyst at CMC Markets Michael Hewson.

The Iseq fell 0.6 per cent to 6,134, tracking trends elsewhere. Big movers were few and far between but the financials fell amid a more bearish outlook generally. Bank of Ireland and AIB fell 3.6 per cent and 6.3 per cent respectively. The State’s main banks have been hit hard by the crisis. Ryanair fell 1.3 per cent to €11.35 amid an ongoing dispute between it and tech firms over the practice of “screen scraping”.

Another firm very much plugged into the global economy is insulation specialist Kingspan, which fell nearly 2 per cent to €56.60. PaddyPower Betfair owner Flutter rose 2 per cent to €126.05 as more and more sporting events resume.

UK shares retreated on Monday as a surge in global coronavirus cases sparked fears of more lockdowns and economic damage, while Glencore slipped after disclosing a criminal investigation into the company.

The blue-chip FTSE 100 lost 0.8 per cent while the mid-cap FTSE 250 slipped 0.6 per cent for its worst drop in over a week. London shares of Glencore touched a three-week low after Switzerland opened a criminal investigation against the miner over allegations it had failed to have measures in place to prevent corruption in the Democratic Republic of Congo. Other decliners included consumer shares such as Diageo and Unilever, and battered energy and travel and leisure stocks. Topping the FTSE 250, outsourcing group Capita jumped 13.2 per cent on a deal to sell its legal process software product. At the other end of the scale was Carnival, down 10.2 per cent after its cruise line extended an operational pause in north America until the end of September.

Lufthansa dropped 3.2 per cent as the German government held last-ditch talks with the airline group’s biggest shareholder, who is threatening to block a €9 billion bailout unless its terms are adjusted. Telecom stocks were hit as Deutsche Telekom dropped 4.3 per cent in ex-dividend trading. However, auto makers, retailers and miners gained between 0.2 per cent and 0.7 per cent, limiting losses. Fiat Chrysler rose 1.4 per cent after news that the Italian government was close to unveiling the approval of guarantees for a €6.3 billion financing.

French group Mediawan shot up 41.4 per cent as it announced the acquisition of Lagardere Studios valued at about €100 million as part of a broader expansion laid out by its founders.

Technology stocks pushed Wall Street’s main indexes higher on Monday but sentiment remained fragile as a spike in coronavirus cases in the United States and other major economies fuelled fears of a setback to the nascent economic recovery.

WHO’s gloomy report of a record rise in global coronavirus cases at the weekend drove demand for perceived safe havens, including gold and longer-term US treasuries.

Travel-related stocks, one of the worst-hit sectors due to the outbreak, fell. The S&P 1500 airlines index dropped 0.7 per cent, while shares of cruise operators Norwegian Cruise Line and Royal Caribbean Cruises tumbled about 6 per cent.

“On one hand, the bulls have made their case for the fact that the opening up is going much better than expected, yet the bears are looking at the number of cases that are starting to skyrocket,” said Carlton Neel, chief executive officer of investment research firm Chaikin Analytics in Philadelphia. – Additional reporting, Reuters

2 Ten of the most mysterious aircraft disappearances

4 iPad Air: A fully featured device that could replace your laptop

6 How to … transfer your data to a new phone