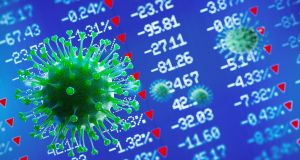 European stocks swung to positive territory on Thursday morning, with a jump in shares of Lufthansa and Bayer helping Germany outperform as investors weighed the economic risks of a number of upturns in coronavirus infections.

After falling as much as 1.2 per cent earlier in the session, the pan-European Stoxx 600 edged up 0.3 per cent, led higher by automakers, utilities and healthcare companies.

The Iseq all-share index was still off by about 0.35 per cent.

Germany’s DAX gained 0.8 per cent, boosted by a 1 per cent rise in Bayer after it agreed to pay as much as $10.9 billion to settle US lawsuits claiming that its widely used weedkiller, Roundup, caused cancer.

Daimler, Volkswagen and BMW rose between 1.6 per cent and 3 per cent, also helping the auto-heavy DAX.

The top gainer on the Stoxx 600 was Lufthansa, which surged 15.1 per cent after its top shareholder dropped his objections to a €9 billion government bailout for the German airline.

“Germany has definitely been a bright spot in terms of recovery. I think that the depth of the recession is probably shallower than initially anticipated,” said Roger Jones, head of equities at London & Capital.

“In terms of getting back to normal, the big question is what the job numbers will be. That’s a crucial point.”

Markets were weighed down earlier this week by a surge in the number of coronavirus cases globally, prospects of a fresh trade tussle between the United States and the European Union and worrying forecast for global economy.

Among other individual movers, budget airline easyJet fell 5.5 per cent after it raised about £419 million through a share placement to help bolster its finances.

German payments company Wirecard slumped as it said it was filing to open insolvency proceedings after disclosing a $2.1 billion financial hole in its accounts. – Reuters