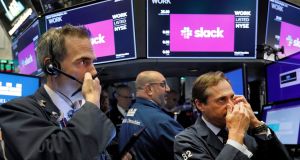 The S&P 500 and Nasdaq scaled new highs on Monday as a gain in Apple shares and US approval for the emergency use of blood plasma in Covid-19 patients lifted treatment hopes and spurred bets of a quicker economic recovery. File photograph: Richard Drew/AP

European stocks marked their best day in nearly two weeks on Monday as signs of progress in developing a Covid-19 treatment offset fears about a resurgence in virus cases stalling an economic recovery.

The pan-European Stoxx 600 index ended 1.6 per cent higher, after the US health regulator said on Sunday it authorised the use of blood plasma from patients who have recovered from Covid-19 as a treatment.

The day’s gains came after a lacklustre week for regional stocks, as a mix of low trading volumes, middling economic data and an uptrend in Covid-19 cases weighed on sentiment.

“The weekend’s vaccine news is at the fore,” said Keith Temperton, a sales trader at Forte Securities. “But we’re in this mid-summer volume vacuum, where the path of least resistance is higher.”

The Iseq rose 1 per cent to 6,460 amid a general increase in values across Europe. Ryanair was up 3.6 per cent after brokerage UBS said it continued to prefer European airlines which are more focused on domestic markets rather than international ones, due to the pandemic. Swiss-Irish food group Aryzta was also up 3.6 per cent amid speculation the company was in talks with a potential buyer.

The baked goods specialist is endeavouring to halt a collapse in investor confidence linked to its ailing US business and complex capital structure. The more upbeat mood across markets lifted the main financials, with Bank of Ireland and AIB up 1.8 per cent and 0.7 per cent.

The State’s largest landlord, Ires Reit, saw the value of its shares rise 1 per cent to €1.49 despite a report predicting its rental income would stagnate this year due to the Covid-19 pandemic.

The FTSE 100 closed firmly in the green after rising on the back of reports that US president Donald Trump wants to fast-track the production of a Covid-19 vaccine.

The Trump administration is considering that the US Food and Drug Administration award an “emergency use authorisation” for the vaccine, which was developed by Oxford University and AstraZeneca, according to the Financial Times.

“The optimism is being driven by a report that president Trump is looking to fast-track the approval of a drug that has the potential to be a vaccine for Covid-19. Even though there are no guarantees that things will go according to plan in terms of the drug’s success, traders are snapping up stocks nonetheless.”

The FTSE was also buoyed by a jump in BT shares after Sky News reported that the media giant is preparing to defend itself from takeover approaches. It jumped by 7.2p to 109p after it asked bankers at Goldman Sachs to update its bid defence strategy.

The other major European markets were driven higher by the uptick in sentiment, which saw energy, banking, airline and house building stocks rise. The German Dax increased by 2.36 per cent, while the French Cac moved 2.33 per cent higher.

Spain’s Grifols, one of the world’s top producers of treatments based on human plasma, gained 1.6 per cent. Oil and gas was the best-performing European sector, adding some 3.4 per cent as crude prices gained on weather-related disruptions to supply. Automobile, chemical and bank stocks also rose more than 2 per cent.

The S&P 500 and Nasdaq scaled new highs on Monday as a gain in Apple shares and US approval for the emergency use of blood plasma in Covid-19 patients lifted treatment hopes and spurred bets of a quicker economic recovery.

The moves come ahead of the four-day Republican National Convention, where Donald Trump will be nominated to lead his party for four more years, kicking off the final sprint to the election on November 3rd .

The US Food and Drug Administration’s decision to use antibody-rich plasma from recovered patients was hailed by Trump and came a day after he accused it of impeding the rollout of treatments for political reasons.

The World Health Organisation, however, was cautious about endorsing the treatment, citing “low quality” evidence that it works.

“The stock market has a reputation of anticipating future events that gives people confidence there will be a ‘normal’ going forward because of the incredible amount of resources that have been put towards the pandemic,” said Tom Plumb, chief investment officer at Plumb Funds in Madison, Wisconsin.

Ahead of the 4-for-1 share split, Apple gained 0.9 per cent to cross $500 per share for the first time, providing the biggest boost to the three main indexes. Economically sensitive energy, financials and materials advanced more than any other major S&P sector.