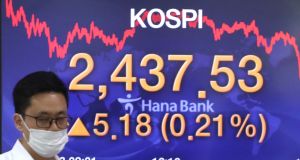 Wall Street’s benchmark stock index has struck an all-time intraday high after rallying more than 50 per cent from the bear-market low hit during the darkest days of the coronavirus crisis.

The S&P 500 index rose 0.3 per cent in early trading on Tuesday to a high of 3395, eclipsing the previous record that was reached in February, before the pandemic slammed Wall Street and global financial markets.

The barometer has soared 54 per cent since the low that was struck on March 23, with the gains being led by America’s biggest technology companies including Apple, Amazon, Microsoft and Google parent Alphabet.

The rise has prompted concerns among some investors that these stocks are vulnerable to a crash reminiscent of the early 2000s dotcom bust.

“Fortunately, [valuations are] not at similar nosebleed levels, which prevents the market meltdown scenario of 2000-02,” said Tobias Levkovich, chief US equity strategist at Citi. “But we still worry that investors have crowded into one area that might be ripe for some pitfalls.”

Stocks in Europe were unmoved on Tuesday, as the continent comes to terms with a new round of government-imposed travel restrictions. Europe’s region-wide Stoxx 600 was flat, while Milan’s FTSE MIB was up 0.5 per cent and London’s FTSE 100 did not budge.

Shares in regional companies that make computer chips were hit hard after the US commerce department announced on Monday that groups would have to obtain a licence to sell Huawei any chip that has been made using US equipment or software. Taiwan’s MediaTek fell 9.9 per cent. – Copyright The Financial Times Limited 2020

1 How much state pension will I get next year?
2 Oxford Covid vaccine trials offer hope for elderly
3 Google tells workers to return to country where they are employed
4 Hurrah for the companies giving staff more time off
5 Tesco takes to the skies with home delivery by drone
6 Buy one Clinton, get another one for free
7 All you need to know in the Max Schrems-Facebook case
8 Sustainable investment: How your pension can help tackle climate change
9 Architect building on tradition of ‘being a service to society’
10 How is Ireland’s meat industry handling recent Covid-19 outbreaks?
Real news has value SUBSCRIBE