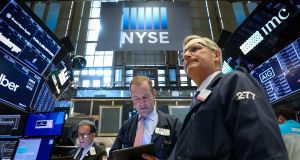 European markets recovered from an early dip into the red as trade tensions between the US and China appeared to soften, providing support for equity markets and prompting a greater risk appetite among investors.

The Iseq closed up 1.1 per cent in line with the positive performance for the major European indices. Building materials group CRH, the largest component of the index, rose 1.4 per cent to €29.02, while Ryanair also posted a 1.4 per cent rise, closing at €10.66.

Paddy Power Betfair was among the fallers, declining almost 0.7 per cent to €66.72. Shareholders backed a proposed name change to Flutter Entertainment at its annual general meeting on Wednesday.

Weaker sterling and stronger oil prices boosted the FTSE 100, although its 0.8 per cent rise was eclipsed by markets in Frankfurt, Paris and elsewhere, as earnings disappointed.

Shares in travel company Thomas Cook tumbled 14.7 per cent after it slumped to a £1.5 billion (€1.7 billion) half-year loss and issued a fresh profit warning, noting that Brexit uncertainty had caused customers to delay their holiday plans and forecasting a tough summer period.

Luxury fashion house Burberry saw shares slide 5.9 per cent after it said its underlying pretax profits remained flat in the year to the end of March, while revenues fell 1 per cent.

Lloyds Banking Group closed marginally higher after the lender saw more than 8 per cent of investors vote against the bank’s pay proposals for bosses at the lender’s annual shareholder meeting in Edinburgh.

The Stoxx Europe 600 Index advanced 1.3 per cent as markets turned positive. In Germany, the Dax swelled 1.7 per cent, while the French Cac 40 rose 1.4 per cent. The Spanish and Italian markets also gained 1.4 per cent.

Thyssenkrupp rose more than 5 per cent after Reuters reported that Finland’s Kone might bid for its €14 billion elevator division.

Nestle shares also advanced after it said it had entered exclusive talks to sell its skin health business to a consortium led by private equity firm EQT Partners.

In basic materials, Norsk Hydro gained 4.9 per cent after a Brazilian federal court lifted one of two production embargoes on a plant owned by the Norwegian metals maker.

Wall Street added more than 1 per cent in early trading, as optimism was driven by upbeat earnings from Cisco and Walmart as well as robust economic data that underlined the strength of the domestic economy.

Cisco Systems jumped 7 per cent, the most among the S&P and the Dow, after the network gear maker gave an upbeat sales forecast and said minimal sales exposure to China has helped cushion the impact from trade dispute.

Walmart rose 2.6 per cent after it reported its best first-quarter same-store sales growth in nine years. The big box retailer also said prices for shoppers will rise due to higher tariffs on Chinese imports.

Chipmakers Qualcomm, Broadcom and Xilinx fell after Washington said it was adding Huawei Technologies to its “entity list”, a move that bans it from acquiring components and technology from US firms without prior approval.