US crackdown on Huawei rekindles concerns about worsening global trade 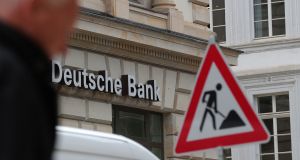 US and European stocks recorded broad-based losses on Monday, as a US crackdown on China’s Huawei Technologies rekindled concerns about worsening global trade and wilted Europe’s trade-exposed auto stocks and tech shares on both sides of the Atlantic.

Ryanair’s stock fell about 4.6 per cent to close the session at €10.30 after the airline reported its weakest annual profit in four years amid struggles with overcapacity, Brexit and delays in delivery of the Boeing 737 MAX.

Bank of Ireland dropped by close to 2 per cent to close at €5.29, as the financial sector across Europe was roiled by reports surrounding Deutsche Bank and allegations that it had looked into troubling transactions involving US president Donald Trump.

Recruiter CPL Resources rose by more than 1.5 per cent to €6.70, as analysts at Davy predicted another “robust rise” in Irish employment.

Weak results from Ryanair triggered a sell-off in airlines across the board. The FTSE 100 gave up 0.5 per cent and the mid-cap index was 0.8 per cent lower. The indexes, however, fared better than their European peers whose chipmakers were hit as sentiment was grim in the wake of the crackdown on Huawei.

Asia-facing stocks including HSBC and Prudential were among the biggest drags on the main index.

In news-driven moves, Coca-Cola HBC, which was seen as a potential buyer for CCBA, slumped nearly 7 per cent after NYSE-listed Coca-Cola Co dropped plans to refranchise its Africa bottling business CCBA.

A stand-out faller among mid-caps was Madame Tussauds owner Merlin Entertainments which slipped 7 per cent on its worst day since last October after a double downgrade by HSBC.

Small-cap Low & Bonar tumbled 24.5 per cent to a record low after the polymer products maker announced the departure of its chief executive and cut full-year targets due to a hit to sales from the US-China trade war.

Germany’s DAX dropped 1.6 per cent, while French stocks shed 1.5 per cent. Italian stocks slid 2.7 per cent, weighed on by Intesa Sanpaolo declining as it traded ex-dividend.

German chipmaker Infineon trimmed intra-day losses to end 4.8 per cent lower after denying a report in Japan’s Nikkei daily that it had suspended deliveries to Huawei.

Banks fell 1.6 per cent, with Deutsche Bank tumbling 2.9 per cent to a record closing low. The New York Times on Sunday reported anti-money laundering specialists at the German lender recommended in 2016 and 2017 multiple transactions involving entities controlled by President Trump and his son-in-law, Jared Kushner, be reported to a federal financial-crimes watchdog.

Viennese stocks slid 1.4 per cent after Austria’s president called for a snap election in September following the resignation of the country’s far-right vice-chancellor over a video sting.

Washington’s crackdown on China’s Huawei Technologies stoked fears about a hit to the broader technology sector and ratcheted up trade tensions between the world’s two largest economies.

Apple slumped 3.3 per cent, weighing the most on the three main indexes and driving down the S&P 500 technology sector 1.27 per cent, the biggest drop among the six S&P sectors trading lower. The iPhone maker was also pressured by a warning from HSBC that higher prices for the company’s products following the increases in tariffs could have “dire consequences” on demand.

US suppliers of Huawei, including Qualcomm, Micron Technology and Broadcom, fell between 3 per cent and 5 per cent, while the Philadelphia Semiconductor Index slid 2.9 per cent to its lowest level in over two months.

Helping limit the losses were gains in Sprint Corp and T-Mobile US Sprint shares jumped 24 per cent, while T-Mobile rose 5.5 per cent after the companies won support of the US telecoms regulator chairman for their proposed $26 billion merger. Verizon Communications and AT&T gained about 2.5 per cent. – (Additional reporting: Reuters)

1 Wifi problems? Quick tips to get your home internet out of the slow lane
2 Two men face fraud charges over £1.2bn sale of Nama’s NI loans
3 Bank of England mulls cutting interest rates below zero
4 Project Eagle: What was it and why is it in the news?
5 Is it possible to get fit while sitting on your sofa?
6 Quintain to seek permission for 1,000 homes at Cherrywood
7 TikTok to invest $500m in data centre and create ‘hundreds of jobs’
8 Sony Alpha 7S III: An ambitious camera that packs in the tech
9 Restaurant bears, WFH love and Microsoft’s acquisition history
10 Deliveroo boosts restaurant numbers as virus forces diversification
Real news has value SUBSCRIBE