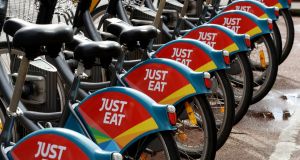 Just Eat’s dive on the London stock exchange – it closed down 8 per cent – puts it at risk of dropping out of the FTSE 100 at the next quarterly reshuffle, due to take place in June. Indeed, its soggy performance may help fellow household names EasyJet and Marks & Spencer, which are also flirting with demotion to the FTSE 250.

Unlike sporting relegation battles, the companies are not directly in competition with each other as such. The rules of the quarterly reshuffles are a little more complex than three up, three down. A stock will be promoted if its market capitalisation a few days before the quarterly review meeting ranks at least 90th in the list, while a stock will be kicked out if its market capitalisation drops to 111th or further.

Even dropping to 101st, however, leaves a stock eligible for demotion if it has to give way to a company that has shot right up into the top 90.

Essentially, the rules are designed to minimise the number of stocks that are knocked in and out of the so-called blue-chip index every quarter, although Just Eat, which first joined the FTSE 100 in late 2017, has been a relative yo-yo, having been demoted in December 2018, only to rejoin in the most recent reshuffle.

Both Marks & Spencer, a member of the FTSE 100 since it began in 1984, and more recent arrival EasyJet have been enduring their share of woes. The airline was busy on Friday defending its demand-led hike in fares to Madrid on the date of the Champions League final but, notwithstanding this bonanza, its summer outlook is weak. Marks & Spencer’s struggle with online competition, meanwhile, is a well-worn tale.

An exit from the FTSE 100 represents a loss of corporate prestige, for a long-term member at least. In practical terms, it means the stock will be automatically sold down by certain index tracker funds either after the demotion or in anticipation of it.

For the cooling Just Eat, this may be the key takeaway.