Markets report: In Dublin banks rise, Ryanair up as it challenges UK quarantine 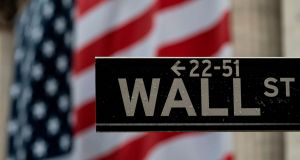 Global equity markets bounced back on Friday as investors took the US Federal Reserve’s outlook for a long road to recovery in their stride and bet shutdowns to fight the coronavirus pandemic were unlikely to be reinstated widely.

The Irish index of shares rose, lifted by gains in bank stocks and food groups. The Iseq index ended the day 0.58 per cent higher at 5,885.

Shares in Ryanair rose almost 2 per cent over the day as the airline said it would join rival airlines in legal action against the British government to lift the 14-day quarantine imposed on travellers. The stock closed the session at €11.28. The group said earlier in the day that it expected to record a loss of €200 million in the first quarter, with a smaller loss in the second quarter of the year.

UK stocks snapped a four-day losing streak on Friday as battered cyclical shares rose, but overall gains were slim as sentiment was subdued after the country reported a record economic contraction in April.

For the week as a whole, benchmark indexes marked their worst weekly drop in about three months, following heavy losses in recent days as the impact of coronavirus hit equity markets.

Cyclical stocks including banks, insurers and oil and gas, bounced back on Friday after being at the centre of a heavy sell-off in the previous session.

The benchmark FTSE 100 index rose 0.5 per cent and the domestically focused mid-cap index climbed 0.6 per cent.

A tight lockdown to contain the spread of Covid-19 shrunk Britain’s economy by 20.4 per cent in April from March and 24.5 per cent from a year ago, data showed.

The FTSE 100 fell 5.8 per cent on the week, while the FTSE mid-250 index dropped 6.4 per cent on renewed concerns about the Covid-19 pandemic after the US said growth in new cases accelerated recently.

European shares closed slightly up on Friday after heavy losses in the previous session, but marked their worst week since the peak of the coronavirus sell-off due to persistent concerns over the pace of an economic recovery. The pan-European Stoxx 600 index ended 0.3 per cent higher, after clocking its worst single-day loss since March 23rd in the previous session. The index has lost about 5.7 per cent for the week, with travel and leisure stocks the worst performers as fears of a second wave of coronavirus infections in the US rattled sentiment.

Markets had come off three-month highs through the week, with the sell-off intensifying on Thursday after the US Federal Reserve pointed to a long road to economic recovery for the world’s largest economy.

On the day, battered shares of carmakers, basic resources and real estate companies rose between 1.4 per cent and 2 per cent. Royal Dutch Shell, BP and Total rose between around 0.6 per cent and 1.7 per cent, despite a drop in oil prices.

Wall Street’s main indexes rose on Friday, after a steep decline in the previous session, but were still on track for their worst week in nearly three months on fears of a rise in new coronavirus infections and economic worries.

The indexes, however, were well off their session highs and the CBOE volatility index turned positive to hit its highest level since April 22nd.

The S&P 500 rose as much as about 3 per cent earlier in the session and is now about 10.8 per cent from its record high after being within 5 per cent from that level earlier this week.

All the major S&P sectors rose with technology and financials providing the biggest boost to the benchmark index.

Boeing Co jumped 5.2 per cent, as it looked to end the week 8 per cent lower. United Airlines Holdings, American Airlines Group, Norwegian Cruise Line Holdings jumped between 11 per cent and 12.5 per cent, leading gains on the S&P 500 following sharp declines in the previous session.