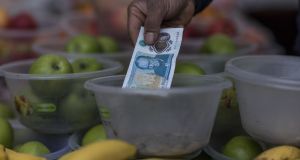 Sterling has risen to its highest level since May against both the euro and the dollar, notching a second day of strong gains as traders bank on a Conservative victory in the general election.

“As we write, the election is Boris Johnson’s to lose,” said Dean Turner, an economist at UBS Wealth Management.

The market is continuing to cut back on sterling short positions and hedges in anticipation of a Tory victory, said Neil Jones, head of FX sales for financial institutions at Mizuho Bank.

Markets view a healthy Tory majority as the best outcome for UK risk assets, at least in the short term, as it would lead to an orderly withdrawal from the EU at the end of January following years of uncertainty.

Still, many analysts note that Mr Johnson’s pledge not to extend the Brexit transition period beyond December 2020 has opened up the risk of a new cliff-edge exit and will probably cap any sterling gains into next year.

While Labour has begun to close the gap in opinion polls, the lead is still 10 percentage points with just over one week to go until polling day, according to the FT’s poll of polls.

Critically, a number of recent polls have shown that Jeremy Corbyn’s advance has stalled.

A YouGov poll released on Tuesday night showed both the Tories and Labour down one point at 42 per cent and 33 per cent respectively. An earlier Kantar poll had the Conservatives increasing their lead by one percentage point to 12 points. – Copyright The Financial Times Limited 2019