Investors’ mood improves despite first contraction in US economy since 2014 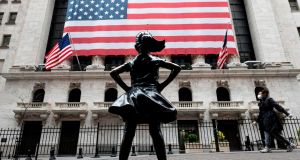 US stocks jumped to seven-week highs on Wednesday after Gilead Sciences gave an encouraging update on a potential Covid-19 treatment, while upbeat earnings reports from Boeing and Google-parent Alphabet added to the sentiment.

The advances came despite data confirming a 4.8 per cent contraction in US gross domestic product (GDP) in the first quarter compared to the same period in 2019, amid widespread fallout from the coronavirus crisis.

This was the biggest slide since the financial crisis in 2008 and the first contraction since 2014.

Gilead rose 5 per cent after the drugmaker said its experimental antiviral drug remdesivir helped improve symptoms for Covid-19 patients who were given the drug early.

All eyes then turned to the policy statement by the Federal Reserve due at the end of its two-day meeting, scheduled for 6pm Irish time.

European stocks, which had earlier fluctuated between modest gains and losses, moved firmly into the green as the day progressed.

In Dublin, the Iseq closed 3.8 per cent higher, as bank stocks and index heavyweights CRH and Ryanair led the index into positive territory.

German, French, Italian and Spanish stocks all advanced, though Italy’s bonds slipped after Fitch Ratings downgraded the nation’s assessment one step to one level above junk, one day before the European Central Bank’s rate decision.

US investors are now awaiting earnings from mega-caps including General Electric, Mastercard and Facebook, which will also give investors an insight into the impact of the outbreak.

“We have some very extreme readings on the blow we’ve just suffered and markets are still bouncing around trying to get a reading on where we will be in the third and fourth quarter,” Christopher Smart, chief global strategist at Barings Investment Institute, said on Bloomberg TV.

“That is very hard right now without knowing where the disease will be, and how quickly people will feel comfortable going back to work, going back to stores, between now and when there might be a vaccine.”

With earnings season in full swing, more companies are cutting jobs and throwing up their hands over future guidance. Based on results through Tuesday, earnings for European companies are headed for a drop of 30 per cent in the quarter, according to Morgan Stanley, which said expectations are similar for the second and third quarters as well.

Elsewhere, shares in Sydney outperformed, while they also rose in Seoul, despite a warning from Samsung Electronics that profit may fall in the second quarter as the pandemic hits demand. – Bloomberg / Reuters.