Beijing reported a rise in exports, outweighing the fall in imports 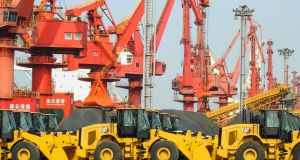 China posted a 3.5 per cent rise in exports in April. Photograph: Getty Images

World shares rose on Thursday after Chinese exports proved far stronger than even bulls had imagined, while bond investors were still daunted by the staggering amount of US debt set to be sold and a tussle over European Central Bank bond buying.

Beijing reported exports rose 3.5 per cent in April on a year earlier, completely confounding expectations of a 15.1 per cent fall and outweighing a 14.2 per cent drop in imports.

The surprise stoked speculation China could recover from its coronavirus lockdown quicker than first thought and support global growth in the process.

The news helped Japan’s Nikkei and Seoul’s Kopsi shake off early wobbles in Asia and Europe’s main London , Paris and Frankfurt markets extended gains, putting all of them roughly 1 per cent higher.

E-Mini futures for the S&P 500 fared better with a bounce of 1.6 per cent, though there were ominous signs. Turkey’s lira fell to a record low amid worries about its dwindling FX reserves, and Italy’s bond yields hit 2 per cent again before managing to recover.

“It’s clear that this virus has gone from east to west and we are now seeing that in the data,” said Societe Generale’s Kit Juckes, pointing to the China numbers and relatively better purchasing managing data in countries such as Australia.

But with the full economic impact of COVID-19 still to be seen and huge amounts of debt potentially pushing up borrowing costs, “the market is hugely split between die-hard bears and buy-on-dip buyers”, he added.

Markets had traded cautiously overnight with renewed Sino-US tensions lurking in the background.

US president Donald Trump said he would be able to report in about a week or two whether China is meeting its obligations under a trade deal, as Washington weighed punitive action against Beijing over its handling of the coronavirus outbreak.

The flow of economic data also remained grim, with US private employers laying off 20 million workers in April and the Bank of England warning that the coronavirus crisis could cause the country’s biggest economic slump in 300 years.

Bond markets saw one of the largest shifts in a while after the US Treasury said it would borrow $2.999 trillion during the June quarter, five times larger than the previous single-quarter record.

It will sell $96 billion next week alone and a surprising amount of that will be at longer tenors, which in turn pushed up long-term yields and steepened the curve.

In commodity markets, conditions were changeable again. Gold had eased on expectations that supplies will grow as bullion refineries resume operations but turned higher to sit at $1,693 an ounce ahead of US trading.

Oil prices were still wild, swinging from 1 per cent down to 6 per cent higher after a six-session streak of gains which has seen Brent almost double from a 21-year low hit in April. – Reuters

1 Columbia Sportswear defies gloom with first Irish standalone shop
2 Ireland faces 'deep downturn' this year and may not rebound until 2024 if there is a second wave
3 How much do Irish people earn? And what will Covid-19 do to our wages?
4 EY prepares for backlash over Wirecard scandal
5 ‘The rental situation stops me moving back home’
6 Brexit: System agreed for Irish goods to skip checks on UK trade
7 Second Covid-19 outbreak and no-deal Brexit an appalling vista
8 Could your old car be giving away all your secrets to its new owner?
9 Why are markets booming when a crash is on the way?
10 Restaurants file court actions against insurers over lockdown losses
Real news has value SUBSCRIBE