European investors shrug off concerns about carmakers and retailers

Iseq edges up 0.2% as C&C fizzes on trading update and Kenmare also in demand 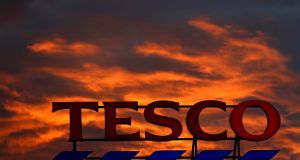 European shares closed higher on Thursday as investors shrugged off concerns about the car-making and retail sectors.

The pan-European Stoxx 600 index, which had spent much of the session in negative territory, rallied towards the end of trading to finish 0.2 per cent higher.

Kenmare was also in demand, rising 5.8 per cent to €2.18, after the mining company said its production of ilmenite, an ore of titanium, hit a record in December.

Permanent TSB advanced 1.8 per cent to €1.60, as analysts at Keefe, Bruyette & Woods upgraded their recommendation on the stock.

Bucking the trend, forecourt retailer Applegreen fell 5 per cent to €5.70, while nutrition group Glanbia declined 3.8 per cent to €16.41.

British shares turned around to end the session at their highest in over a month as investors looked beyond a lack of detail following the conclusion of three days of China-US trade talks and weak news from the high street that renewed worries about the retail sector.

The Ftse 100 index added 0.5 per cent. Tesco, Britain’s biggest retailer, bucked the trend in its sector with a 2.2 per cent rise in its share price after higher UK like-for-like sales over Christmas. Jefferies analysts said the trading update confirmed Tesco as the “clear 2018 UK Christmas winner”.

Otherwise, the largely downbeat trading updates from high-street staples – Marks & Spencer, Debenhams and Halfords – deepened the gloom across the retail sector as shoppers reined in spending.

Halfords, a cycling and car parts chain on the midcap index, slumped 22.2 per cent to its lowest in more than six years, while department store group Debenhams slid 14.7 per cent after saying it was looking for fresh funding as the 241-year-old group battles to survive.

An index for European auto stocks fell 0.5 per cent as Ford and Jaguar Land Rover highlighted how the sector was struggling with a slump in demand for diesel vehicles, tougher emissions rules and a global economic slowdown led by China.

Ford said that it would cut “thousands” of jobs in Europe, while Jaguar Land Rover said it would cut 4,500 positions.

Tyre maker Continental ended the day down 2.4 per cent. Continental and Faurecia were doubly hit when UBS downgraded both stocks, citing a slowdown in car sector growth.

Kering, which owns fashion brand Gucci, was cut to “neutral” from “buy” at UBS, driving the stock down 3.5 per cent. Luxury stocks have suffered from mounting signs of slower growth in China.

A difficult few months for equities have driven stock valuations down to what some investors consider attractive, despite the risks.

“After a weeks-long roller coaster for global equities, valuations have de-rated in line with past bear markets, and sentiment has taken a hit,” wrote Goldman Sachs analysts. “With equities already pricing a very negative outlook, we think this points to a risk rally – especially if global growth holds up as we expect.”

Wall Street extended its rally into a fifth straight day in a session of whipsaw trading as investors responded to mixed comments by Federal Reserve Chairman Jerome Powell, while a warning from Macy’s pummeled retail stocks.

Mr Powell reiterated the views of other policymakers that the Fed would be patient about interest rate hikes. But major stock indices temporarily moved into negative territory after Mr Powell said the bank’s balance sheet would be “substantially smaller,” and after he raised concerns about the size of US debt.

“That’s what spooked the market a little bit. It’s more of a commentary on the entire economy as a whole,” said Randy Frederick, vice president of trading and derivatives for Charles Schwab in Austin.