European shares down on concerns over Brexit and US shutdown 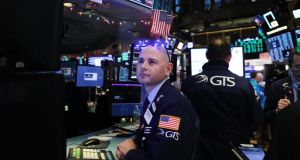 European shares slipped on Monday as investors remained nervous about the euro-zone economy, Brexit and the US government shutdown.

Building materials giant and index heavyweight CRH slipped 1.83 per cent to €23.63 as investors sold about 1.67 million shares in the group. About half of its business comes from the United States, where it supplies government-funded projects such as highway construction.

Housebuilder Cairn Homes added 1.23 per cent to €1.15. The company is one of a number seeking permission for large residential developments in the Republic. Rival Glenveagh inched down 0.64 per cent to 78 cent.

Luxury car maker Aston Martin accelerated 1.7 per cent to 1210.6 pence sterling after announcing contingency plans for a disorderly or “no-deal” Brexit that include preparing to fly in parts and use ports other than Britain’s gateway at Dover.

Irish-founded explorer Tullow Oil climbed as much as 5.5 per cent after analysts at Canada’s RBC Capital Markets upgraded the stock on the back of potential finds and rising crude prices. Tullow, which has a large operation in Dublin, pared some of the gains later in the day to close 3.6 per cent up at 198p.

Austrian tech specialist AMS, which supplies the iPhone maker, surged 9.6 per cent to 20.65 Swiss francs, putting it at the top of Europe’s Stoxx 600 after announcing a partnership with Chinese software maker Face++ to produce new 3D facial-recognition features for smartphones.

German digital payments specialist Wirecard, whose Irish and British business is based in Dublin, climbed 2.4 per cent to €136.45 after Bank of America Merrill Lynch also backed it.

Pacific Gas & Electric slumped about 22 per cent, dragging down most US utilities, after Reuters reported the company was exploring filing some or all of its business for bankruptcy protection as it faces billions of dollars in liabilities related to fatal wildfires in 2018 and 2017.

Dollar Tree jumped 5.7 per cent after activist investor Starboard Value called on the company to sell its underperforming Family Dollar business and proposed replacing a majority of its board.

Loxo Oncology surged 65.8 per cent after Eli Lilly said it would buy the cancer drug developer for about $8 billion. Lilly fell 1.2 per cent. – Additional reporting: Reuters