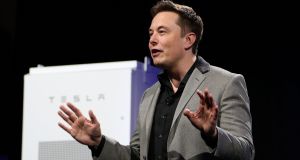 Elon Musk deleted a tweet in which he shared an incorrect report that Tesla Inc had outsold all other luxury automakers in the U.S.

The Tesla chief executive shared an article Thursday written by a Forbes contributor that incorrectly said Tesla had become America’s number one premium auto company. Forbes has since amended the story and clarified that the earlier version had compared Tesla’s global deliveries with US-only sales for Daimler’s Mercedes-Benz, BMW’s namesake brand and Toyota’s Lexus.

Tesla doesn’t report its US sales on a monthly or quarterly basis like all other major automakers in the market, so it’s difficult to tell how much ground the company is actually gaining on Mercedes or BMW on American soil. But at least one of the two German giants has given Musk credit for starting to make an impact.