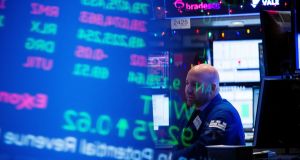 The Connecticut-based firm is the world’s biggest hedge fund with about $160 billion in assets. The gains for its Pure Alpha Strategy came as other fund managers were whipsawed by volatile markets, resulting in the industry posting one of its worst years ever.

Hedge funds on average lost 6.7 per cent in 2018, according to the HFRX Global Hedge Fund Index. That compares with a 4.4 per cent decline for the S&P 500 Index of stocks.

Since its inception in 1991, the Pure Alpha Strategy has had an average annualized net return of 12 per cent, according to the document. The macro manager trades globally across more than 150 markets.

The firm was founded by billionaire Ray Dalio and its current chief executive officers are David McCormick and Eileen Murray.

Prof Matt Cooper: ‘it’s not about the money; it’s about the patients’ 09:24
Brussels drafts rules to force Big Tech to share data 09:15
Shell plans to cut up to 9,000 jobs in transition plan 08:53
Open Orphan eyes profitability as it reports £4.1m ebitda loss 08:36
Eir says its 5G network has grown threefold since launch 08:03

1 Google tells workers to return to country where they are employed
2 Pension problems: Workers ‘leaving free money on the table’
3 Recurring Covid restrictions will kill off many viable businesses
4 Invest in more social housing to avoid Covid-related supply shock, says ESRI
5 Prof Matt Cooper: ‘it’s not about the money; it’s about the patients’
6 Institutional investors are playing a key role in providing housing for all
7 CRH finance director Senan Murphy to step down
8 Will tracker mortgage be at risk if Ulster Bank closes?
9 Sean Quinn stunned at rebranding of Quinn Industrial Holdings
10 Subway bread too sweet for the Irish tax authorities
Real news has value SUBSCRIBE